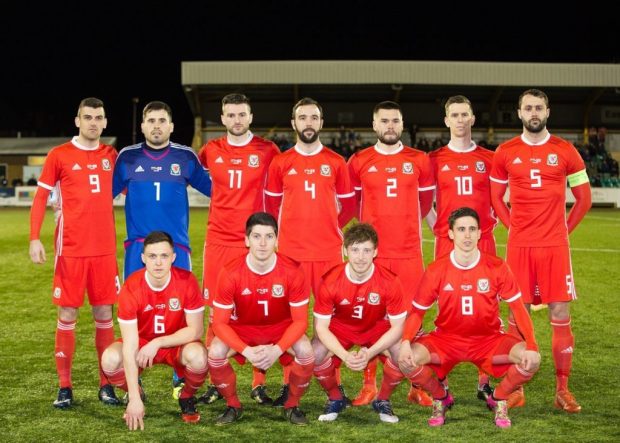 ON A clear, crisp evening under a crescent moon, a Wales victory was never written in the stars but the hosts should be proud of their efforts.

Team have been announced for tonight’s #WalesC match at Jenner Park!! Keep it here for live tweets! pic.twitter.com/QdRnp416uE

With a decent crowd in attendance, dotted with representatives from the FA and FAW, the two sides contested a very even game.

England, with their previous experience of playing at this level appeared in control for large periods of the game, monopolising possession but not really creating much to trouble Ashley Morris in the Wales goal.

When they did attack, they were effective. Fejiri Okenababirhie, currently at Dagenham & Redbridge broke free and broke the deadlock with an emphatic finish into the roof of the net.

England continued on the offensive, with midfielder Ryan Croasdale’s and Mitchell Pinnock’s efforts from outside the box both stinging the palms of Bala keeper, Morris before being swiftly gathered up.

On the half-hour mark, Wales began to find their way back into the game. The industrious Danny Gossett impressed throughout, winning possession in midfield and creating chances for the front men.

Wales were beginning to look a much better side having shaken off the weight of the occasion, but were lucky not to be heading in 2-0 at the break when England missed a great chance to double their lead. Jenner Park, Barry was the venue

The hosts started the second half strongly and were unlucky not to equalise when John Owen’s volley at the back post was tipped round the post by Boreham Wood’s Grant Smith.

Owen was left to rue his missed chance moments later when the Northern Irish referee awarded England a penalty for what appeared to be an innocuous challenge. It was converted by Okenababirhie. The only cheer for the home fans coming as the PA made an attempt at pronouncing the scorers name.

It seemed the game was over, but Wales persevered and ten minutes later substitute Mark Jones halved the deficit with a well worked goal.

For a while the visitors looked shaken and struggled to escape their own half but again Okenababirhie broke free and powered home his hat-trick goal, much to the delight of the PA.

Yet again the game seemed to have been put to bed by the English but Wales rallied and set up a frenetic finale when Bala’s Chris Venables made it 2-3 with almost 10 minutes left.

It wasn’t to be in the end for Wales however but did show that they can compete at this level and many will be hoping this first Wales C fixture won’t be the last.