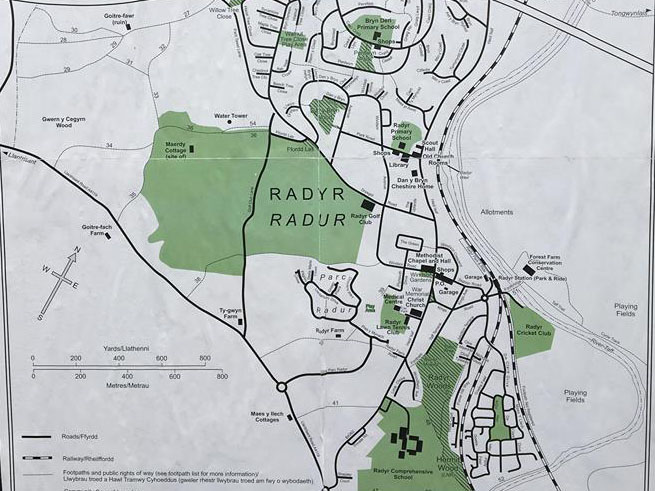 RESIDENTS in Radyr have set up a group to tackle the ongoing problem of HGVs travelling illegally through the village.

Heol Isaf, the main road running through Radyr, is being used as a shortcut by lorries to get to the nearby Plasdwr housing development despite signs warning of the weight restrictions.

The development, situated to the west of Cardiff, will provide up to 7,000 new homes, five schools and healthcare facilities.

To try and combat the issue, residents have been taking pictures of lorries they say are using the road illegally and posting them on social media and sharing them with police.

Villagers have also set up a group to campaign for change. The group, ‘Love Our Villages,’ has over 100 members with around 10-15 people doing the primary campaigning.

They have placed signs through the village encouraging drivers to slow down and have put forward suggestions to the council on how to improve the traffic issues.

A representative of the group and local resident who wanted to remain anonymous said: “The traffic in Radyr has been an ongoing problem.

“There has been concern for many years but there is a notable difference now.”

“Love Our Villages is a group formed by residents for residents, it’s about making our village safer and making sure it stays a residential one. It seems to us that the road has become more important than the residents.”

“The group is really active, people are quite aggravated over the issue.” As well as the group, there are also a number of twitter pages set up by residents who are posting pictures of lorries they say are flouting the road restrictions.

However, police are unable to use these pictures as evidence to prosecute.

One of the companies whose lorries were photographed driving through Radyr is Tarmac construction suppliers.

A spokesperson for Tarmac said: “We are committed to responsibly managing the impact of our traffic on the local network and appreciate the concerns raised.

“All independent contract hauliers carrying out deliveries in the area for Tarmac are given route information which explicitly outlines that there is no access through Radyr for HGVs.

“We take this matter seriously and have followed up with our hauliers to reiterate correct routes and apologise for any inconvenience caused.” Residents are becoming increasingly frustrated with the fact that it is difficult to prosecute and challenge the legality of these vehicles.

Despite the road being owned by Cardiff County Council, only the police have the ability to prosecute these offences.

Conservative Councillor for Radyr, Rod McKerlich, said “From time to time the police mount an operation to catch people, but unfortunately it’s a costly and time consuming exercise.

“It’s not an easy problem to solve, the signs on their own do not seem to be working. The drivers know that it’s not legal but take a chance anyway.”