People forced to “play Tetris with parked cars” in Barry 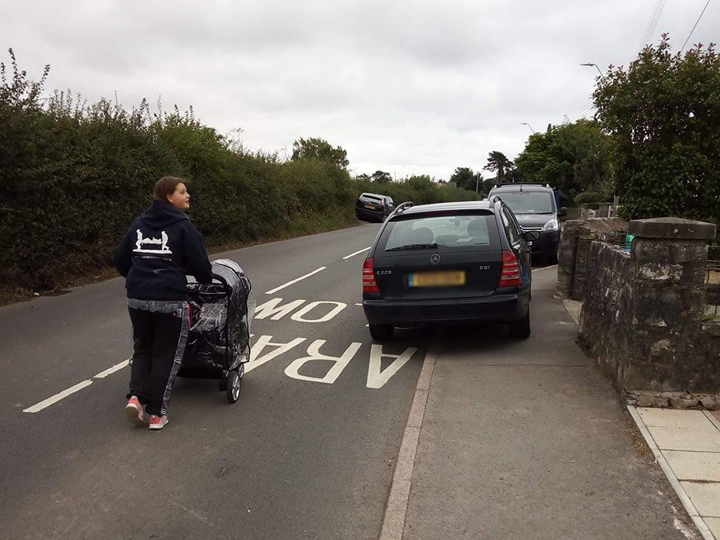 PEOPLE in Barry are posting pictures online of vehicles that they claim are being parked in dangerous and unsafe places around the town.

The images include vans parked over four bays, driveways and pavements blocked by abandoned cars and the right of way for pedestrians being obstructed. Other photos show people with prams and those in wheelchairs diverting into roads because pavements are impassable.

Locals are posting the pictures on a Facebook group that’s been set up to highlight dangerous and inconsiderate parking in the town. So far the group has attracted almost 2,000 members. “Pedestrians are forced to play Tetris with parked cars.”

Mrs McCarthy blames the lack of adequate parking space in the town, saying: “The parking is so bad even the seagulls circle endlessly looking for a space.”

Sian Thomas, who has Multiple Sclerosis, said in an online discussion around pavement parking in Barry: “I’m a wheelchair user. I can’t access any of the pavements safely at the Colcot. This especially concerns me near Pencoedtre High School where I have to take my life in my hands to go shopping.”

Pavement parking is a grey area across most of the United Kingdom, as the Highway Code states that drivers “must not park partially or wholly on the pavement in London and should not do so elsewhere unless signs permit it”.

This means that enforcement of the code is discretionary as drivers “should not” park on kerbs, rather than in London where it is an offence for which you can be fined £130.

Residents concerned with individual parking that blocks their right of way can ring 101, however as pavement parking is not illegal, there is no guarantee that this will resolve the matter.

The Department for Transport states: “There is currently no national legislation banning the parking of all vehicles on the pavement, due to the wide range of circumstances and locations where pavement parking occurs.

“For example in some narrow residential roads with a lack of off-street parking provisions, drivers have little option but to park on the pavement to avoid causing traffic hazards. The Government has no plans at present to introduce new legislation specifically aimed at banning pavement parking on a national scale.”