Universal Credit means foodbanks are needed more than ever 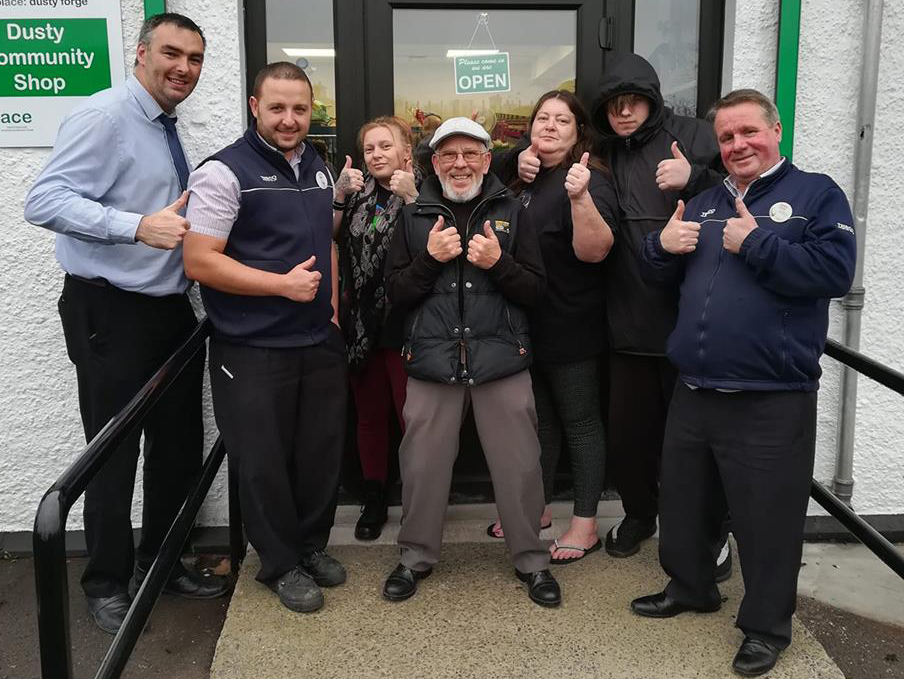 The Dusty Forge’s foodbank volunteers and workers from Tescos who drop off food every week.

FOR most of us, when we think of Christmas, we think of the gloriously anticipated roast dinner. But for thousands of people in Cardiff this year, thinking about food is not a luxury, it is a matter of survival.

In just December last year, 13,755 people used food banks in Wales. Of these, 1,299 people were from Cardiff and 596 of these were children.

With the roll out of Universal Credit this year, charities are seeing food poverty become an increasingly bitter reality for more and more individuals and families. Universal Credit is replacing the six government benefits and merging them into one payment every six weeks, which is proving more than problematic.

One in five people in the UK  now lives below the poverty line according to Trussell Trust, the leading foodbanks organisation.

And as Christmas approaches, foodbanks are preparing for more people than ever to walk through their doors this month in desperate need of food.

Last week, I visited an independent foodbank in Ely, famously one of the most deprived areas of Cardiff. It is run by a few volunteers who dedicate their lives to helping others with unfaltering enthusiasm.

Tucked away at the back of Ely’s community centre, The Dusty Forge’ there is a tiny room brimming with boxes of pastries, cakes, vegetables, sandwiches and tins ready to be bagged up and handed out.

The first lady to walk through the door is Gloria Williams. She has a white bob of wispy hair clipped at the sides with little pins, a burgundy raincoat and a loud presence. She chuckles as she catches eyes with me: “Ah a newbie!” Michaela (left), one of the workers at the Dusty Forge foodbank and Gloria Williams.

Gloria is 82 and humbly honest. She gushes over the Dusty’s volunteers and how they have helped her.

“I have £90 a week from my pension and I have to pay my bills so there is nothing left for food. Lots of people are reluctant to come here because they are embarrassed or think they’re second class citizens. They don’t make you feel like that here at all. It’s special.”

This year, Gloria lost two of her sons. Paying for the funeral costs while still trying to feed herself and her family was financially crippling. Even so, she says: “I like to pay my way. So when I can, I show my appreciation.”

The warmth between the volunteers and Gloria just shows how important food banks are; not just providing sustenance, but also genuine and caring support.

Despite her own hardships, Gloria still volunteers for the foodbank and donates what she can to help others. She’s even gained the nickname Cake Lady from her regular trips to give cakes to homeless people on the streets.

When it hit 11am, the room was suddenly filled with mums with their prams and babies, who had been in the room next door. It is a sobering sight to see so many women and children fill a room, just trying feed their families.

Charly is a 25 year-old mum from Caerau. Every Tuesday, after the mums and toddlers group, she goes into the foodbank.

“I come here every Tuesday for a helping hand with food because any money goes straight on bills. The problem is the minimum wage is lower than the living wage. There are mums going without food just to feed their kids,” she said.

Most foodbanks in Cardiff are run by Cardiff Foodbank which started in 2009 under the Trussell Trust network, which runs two thirds of those in the UK.

Once an individual has been assessed by a GP, school, charity or many other organisations, they can get a voucher. This voucher will provide a package of three days’ worth of non-perishable food, at about 11 kilos. The food packages are carefully filled with a variety of foods, guided by dietary advice. Some of the bread supplies that have been donated to the foodbank.

Chair of trustees, director and volunteer of Cardiff foodbank, Eleanor Sanders, told me: “When foodbanks started in the 1990s people might have only needed a one-off food package, which is why it is only three days’ worth.

“However now, individuals who are coming in now don’t just need one package, they need two or three lots.”

Mrs Sanders believes the partial rollout of Universal Credit has already had a huge impact on people. From just April to September this year, Cardiff Foodbank saw an 11% increase in visitors.

That was 5,976 emergency food supplies handed out in six of what should be the charity’s lightest months.

“Because of Universal Credit there is a five-week built-in delay. If people forget to provide a small detail, like not giving an address, their benefits are withheld. Small mistakes like this can leave people without help for 10 weeks. It is absolutely terrifying,” explained Mrs Sanders.

“In a sense, it is almost more worrying that people on low wages still need food banks to survive.”

Many people who have jobs, sometimes more than one, are still struggling to pay the cost of living because the minimum wage is not enough. With Universal Credit on top of this, plus the added factors of looking after a child, all contribute to some of the difficulties that send people to foodbanks.

Mrs Sanders and her team are anticipating a very busy winter: “There are a few reasons for this; in the winter, people might choose warmth over food and heat their homes. Or a family might decide to buy some presents for their children which doesn’t leave enough money for food. People get more ill over winter too – it’s a vicious circle.”

Cardiff Foodbank volunteers also ensure they chat with anyone who comes into the foodbanks, as well as offer essential support from a money advice team.

The Trussell Trust’s chief executive Emma Revie said: “Our benefits system is supposed to protect us all from being swept into poverty – but what we’re seeing is people struggling to heat homes and put food on the table because they simply cannot afford the basics anymore and that just isn’t right.

“We know it doesn’t have to be like this. We’re urging the public to donate generously during the first part of December and into the New Year, as unfortunately the need for foodbanks is not going to end after Christmas.”

christmas, Dusty Forge, foodbanks, Universal Credit
You may also like