Home > Uncategorised > #KindnessinCardiff – A city that comes together at Christmas

#KindnessinCardiff – A city that comes together at Christmas 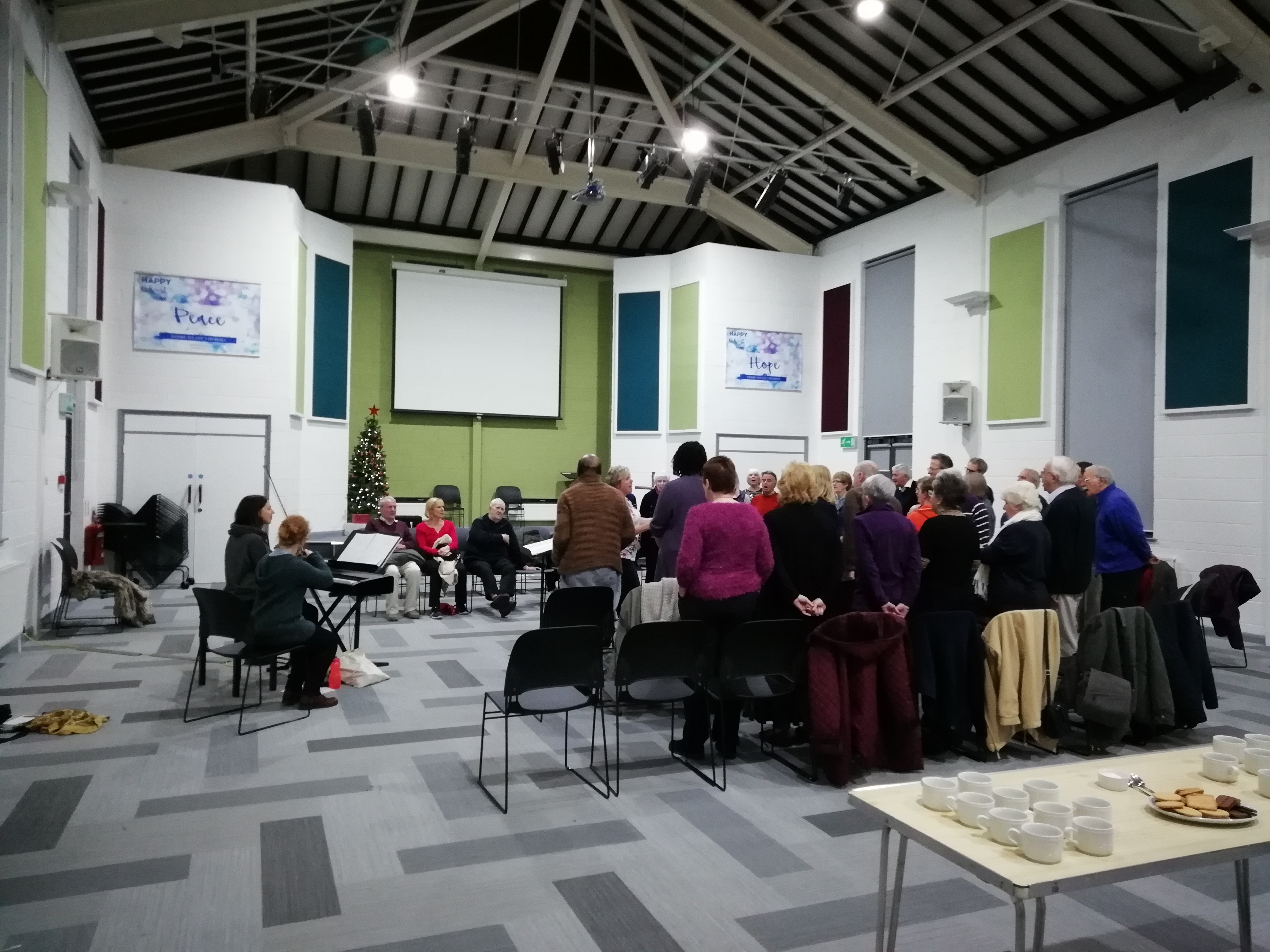 CHRISTMAS is a time for giving — giving presents, giving time to family members, giving help to cook the Christmas dinner.

Cardiff, unlike any other city I have been in, has embraced the idea of giving up time for others.

I spoke to a family, a student hoping to make a difference, and a few organisations who have truly embraced the spirit of giving at Christmas — and all-year round.

Siblings band together to raise care packages for homeless I know that as a child at Christmas the first thing that usually comes to mind is what would Santa and my parents get me. It is a narrowed naïve look at the world, but that’s being a kid, right? Well, not for George and Molly Allen. George, 8, and Molly, 9, of Cathays, have decided to take on the role of Mr Claus himself this year. Described by their Mum, Kelly, as spending “most of their time in Cardiff asking questions and offering spare pocket money to homeless people or buskers” they decided to go one step further this year.

The Allens are building care packages for the homeless people of Cardiff as a way of reminding them that they are not forgotten about, that they deserve as good a Christmas as possible.

The more I engage with the Allens, the more I see kindness oozing from them. Mrs Allen tells me it was something they always wanted to do but put off due to a lack of support.

“They love talking to people and they’ve chatted to one lady before all about her experiences and how she ended up homeless. They’re not blind to it and they want to help,” she said.

To better that, they are also making their own hats and scarves to include in the bags as well. The Allen family, who are truly embracing the giving spirit of Christmas

On the 18th December the Allens are heading into central Cardiff with essentials for those who are less fortunate this Christmas. In the meantime, to help this fantastic cause, you can drop anything that you think would be of use to their heart-warming cause at Cathays Community Centre.

They are particularly looking for things such as food, gloves and scarves, wet wipes, generally anything that you feel would be a benefit to the homeless of Cardiff.

How a train journey inspired a university student to give back Amany, second from right, and her friends handed out the ‘Cwtch Bags’ last month

We have all been there, you’re getting a train back late, it’s cold, it’s dark and all you can think about is getting home and being in the warm. There is no intentional disregard for anyone else, but it ends up that way. These same thoughts led to a very different outcome for Cardiff Met University student, Amany Wasa.

Something clicked on a particular train journey home for the Events and Project Management student. If she can have a warm home to go back to, just think of those who can’t.

It was then that Miss Wasa, 21, decided to try and help in any way that she could. She decided to set up a group, ‘Cwtch Bags’. Merely intended to be a few friends filling bags with items that may help the homeless, it grew into something so much more.

Consisting solely from the kind donations of others it would contain anything that may be of help to homeless people of Cardiff. These basics like deodorant, wet wipes, even coffee vouchers, were so much more than just basics.

One bake sale and a lot of generosity from local people later, and a total of 45 bags were made up before they were distributed on November 29. With support from Cardiff Met University, friends, and even local businesses what seemed like something small to a university student was overwhelming for those in need. Speaking to homeless charities in Cardiff, Miss Wasa made clear that size specific clothing was not needed. For the several jumpers that her wonderful cause received, she has decided to split them equally amongst homeless hostels.

This project particularly tells me of the level of people who want to help when an initiative like this is launched. Little Man Coffee Shop gave ‘Cwtch Bags’ 25 free coffee vouchers to distribute among the bags. This seemingly unplanned kindness initiative is a true indication of the collective kindness, not just from Amany, and the people who helped her cause, but the general public of Cardiff.

From this project, Amany hopes to continue this cause beyond the winter months. She believes that it might “get a pattern rolling” and in turn leave a mark on university students to continue after she graduates.

The all-year-round brilliance from Helping Our Homeless Wales Sarah Mason, right, is known by many on the streets and is always on hand to help

As we all know, from the previous initiatives, homelessness is a huge problem in the UK and is an issue that needs to be tackled better. Cardiff is no stranger to this struggle but organisations like Helping Our Homeless Wales certainly help in the fight against this.

Helping Our Homeless Wales (HOHW), while not specifically limited to Cardiff, offer hope to the homeless people of Wales.

Created over three years ago, HOHW holds all sorts of events, with the latest, a bingo night on December 14, to help finance resources for their team to go out and give clothes and food to those forced to sleep on the streets in Wales.

The group recently purchased tents for other organisations and after successful fundraising are holding a Christmas dinner for the homeless on December 22. Their shoebox appeal intends to rake in 150 boxes, but I am told it can easily be doubled with the amazing support they have.

HOHW has links to areas such as Wrexham and Swansea but has recently branched out to Newport and Carmarthen. Hoping to secure a premises if they can get full charity status, which they hope to secure by Christmas, the team are confident that this could help fulfil even bigger plans.

Miss Mason, a mum of two who works full-time, says: “We work to build vital trust, to support and never say enough, to never give up, we are no pushover, but we are there to deal with hard times, the rough times and worst of all the times when life can be almost unbearable.”

“Our aim is always [to help] those in need and we as a team work 24 hours a day to ensure our phone is manned so that we can work with any area or attend where we hear someone needs help. I have an amazing team.”

Beyond all the fantastic work that is being done in this festive season, Miss Mason sends out a reminder that our homeless are not homeless just at Christmas. She says: “This is something they face daily. You look at January and February. These two to three months are the toughest for us, and the need to keep them safe and alive really is essential.”

The choir charity that forgets no-one The energy of Lorraine Kelly’s 2012 Woman of the Year, Kate Woolveridge, helps make each weekly session a fun hub for those with dementia.

Firstly, this is a cause like no other I have ever come across. Forget-Me-Not Chorus (FMNC) is a charity that supports people with dementia and their families through weekly singing and creative workshops. Conducted by the exuberant Lorraine’s Woman of the Year 2012, Kate Woolveridge, the two-hour sessions offer an escape to those who live with dementia.

I had the privilege of going along to a rehearsal earlier in November at Thornhill Church Centre. I was met with smiles and a warm atmosphere.

I am also told I have no choice in singing and automatically I am one of the choir. So, much to the dismay of those around me, I am left (albeit horrendously) joining in with Rudolph the Red-Nosed Reindeer.

Except, it’s not just singing. It’s dancing as well. Embarrassing myself twice in the same night, what have I let myself in for? A lesson on the fabulous work that this charity does, that’s what.

I am sat next to Mags and Brian, both of whom have lived in Cardiff their whole lives and, both of whom immerse themselves, perhaps more than most, in the enthusiasm of FMNC’s Monday rehearsals.

Mags tells me, “it brings us together”. She recalls that Brian never used to sing much yet here he is for two hours a week singing with passion. How does that happen?

Well, if ever there was a safe place to be included this was it. This is a place to be yourself and part of something. Kate knows everyone by name. The beaming smile of Nicki on piano is infectious and the occasional witticism from Kate brings widespread laughter. I get a family feel here.

Administrative director Sarah Teagle, who helped set up the charity, tells me that a lot of people who come here are in denial about their dementia.

“lt’s a safe space for them. Where they don’t think about it,” she said.

They run three sessions per week, two in Cardiff and one in Newport.

If you would like to support the wonderful work of this charity, the choir is hosting a performance in All Nations Church, Cardiff, on Monday, December 17.Tickets can be bought for £5 on the door or online at forgetmenotchorus.com/tickets.

These are just a few of the capital’s fantastic people and initiatives. One Cardiff café BigMoose, uses its profits to help the homeless and other disadvantaged people in the city. Nightshelter, a scheme run by many of Cardiff’s churches, houses the homeless from December all the way until April. Amerpreet Singh Khalsa and Midland Langar Seva Society, without fail, feed the homeless in Cardiff every Saturday. Tesco has a food bank scheme. A Cardiff organisation We Make Good Happen, started a #Tenner4Good initiative leaving £10 notes scattered across the city in the hope that it would encourage others to do good deeds. Cardiff Foodbank is running a fantastic Reverse Advent Calendar scheme to make giving more fun. A Plymouth-born man teaches Welsh to Cardiff’s refugee community.

Not forgetting the endless other groups that go out of their way to help others, and this is just in Cardiff. Kindness is everywhere.