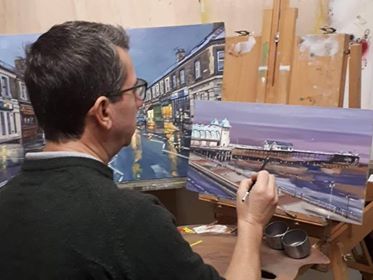 IT wasn’t difficult to spot which house belonged to Malcolm Murphy.  Looking down a Splott street of traditional terraced houses, his stood out.

It contrasted with the traditional grey, white and brown stone houses and was painted duck egg blue.  As I approached the front door, I noticed something striking on the glass.  It was a Welsh dragon with the words Ty Mel written above it, all in gold.

Malcolm, 47, is an artist.  I came across his work on Twitter after his friend Alan Bretos, 52, from Llandaff North, shared one of his paintings.  It was a take on Church Street, looking past Greggs and Café Citta to St John The Baptist City Parish Church.

I asked Alan why he wanted to promote Malcolm’s work. “His paintings of famous and not so famous landmarks are unique. I think he will, in years to come, be a local legend,” he said.

That is exactly why I was at Malcolm’s house.  I wanted to understand the person behind the paintings, the man who brings beauty to ordinary sights around Cardiff.

When Malcolm answered the door, he greeted me with warmth.  He had a big smile on his face and kindness in his eyes.

“Nice to see you Lucy, come in,” he said rolling up the sleeves of his grey jumper, “I’ll put the kettle on right away.”

Malcolm seemed like a family friend you had known for years, he was open and hospitable. The interior of his house reflected this: it was a warm, well looked after family home.  Nothing seemed out of the ordinary.

Malcolm had promised to show me some paintings.  At first, I wondered if he had forgotten.  I could see no examples out in his lounge or kitchen, other than a few framed paintings on the walls.

One was an idyllic painting of Roath Park – it was one of Malcolm’s originals.  The calming blues of the lake reflected the blues of the sky, and its depth of field made it feel as though you could jump in and stroll down the path.

“Would you like to see my studio?” Malcolm asked.

I thought he might have a separate studio – perhaps in his garage or maybe in a warehouse somewhere down the road, though I didn’t recall seeing one.

I followed him out of his lounge, past his hallway and into a small room opposite – we were there.

“I worked in workshops for 15 years, where I did traditional sign writing and theme park signs.

“I went to those workshops because I thought I couldn’t fit an eight by four-foot sheet into the house. I can’t remember what it was for, but I got it to fit.

“I thought, hang on, I could convert this room into a workshop and see how it develops.

“That was four years ago, and I haven’t needed to go to a workshop since – touch wood,” Malcolm said, when I asked how his in-house workshop came about.

The room looked just like a professional workshop, just smaller, with several works dotted around it.  The walls were mostly bare, apart from a few splashes and splodges of paint.

There was an easel in the centre of the room. On it, was an instantly recognisable painting of Penarth Pier that Malcolm had nearly finished.

Behind it, stood a painting of City Road on a rainy day.  Somehow, Malcolm had turned this mundane, dreary scene into something charming. I asked him how he decided what to paint: “I keep my eyes peeled wherever I go, anything could turn into a painting and the point is that you wouldn’t expect to find it beautiful,

“It’s about knowing what colours to use to bring something alive,” he said.

I dug deeper into Malcolm’s background: what inspired his artistic career?

He told me: “From the age of 13, I got into breakdancing and was inspired by the American graffiti art that came with the scene in the 1980s,

“I enjoyed art in school but didn’t gain much from it. I was always drawing in my friends’ books, instead of listening to the teacher,” he laughed.

“Me and my friends, Chad, Martyn and Vidler, called ourselves Clash of Styles, we would find derelict walls around Splott and do graffiti art on them.”

Clash of Styles would save their pocket and lunch money so they could buy aerosol cans from Newport Market, every Saturday morning.

This was Malcolm’s life until the age of 16, when he was caught by the police.  The Clash of Styles didn’t notice a camera pointing directly at the wall they were working on.

“We had to go to the police station and give all sorts of details. They contacted the school and our headteacher punished us.

“We had to wash it off and repaint the wall white – such a shame I always thought.”

Following this, Murphy began an apprenticeship in Swift Neon in Penarth, where he learnt traditional sign writing.

Malcolm started a career and stayed out of trouble, creating signs for pubs all around Cardiff. He also worked on bigger projects in places such as Folly Farm and Heatherton.  This included painting theme park rides using gold leaf.

I was curious about gold leaf, so Malcolm handed me some to look at. He explained how he used it for art, lettering and exterior designs, such as on the ornate gates outside Tredegar House, Newport.

I was fascinated that something so delicate could be crafted into such crisp and precise designs.

“It’s what I used on my front door.  It was 23.5 carat gold leaf, painted in reverse of the glass. It took about 16 hours altogether.

“Ty Mel, is the name of our house – it means Honey House.

“I painted it simply because it looks great and it serves as a dream catcher – if you’re into all that stuff.”

Malcolm is someone who can see artistic potential in the most unlikely of things, whether that be a rainy day, or his front door.