Home > News > Residents take speed prevention into their own hands

Residents take speed prevention into their own hands 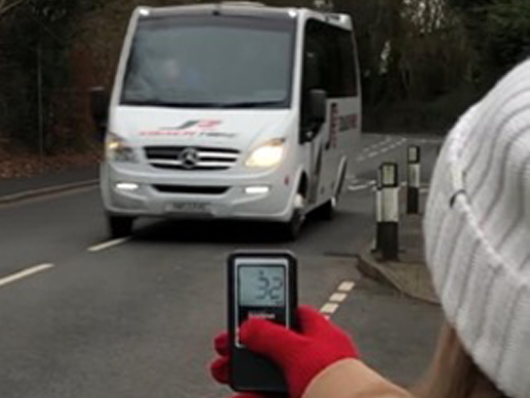 RADYR residents have been given speed guns by police to patrol the main road through the village.

South Wales Police have partnered with the residents for the ‘Community Speedwatch Scheme’ where volunteers are given handheld devices to deter speeding drivers.

The scheme currently has 10 volunteers who have received special training by police in using the devices.

While the devices will be used to deter drivers from speeding in the village, they will offer no form of legal prosecution.

The introduction of the scheme is a result of mounting concerns by residents about drivers speeding along the main road in Radyr – Heol Isaf – which has a 30mph limit.

The road currently has a fixed speed camera situated by Radyr Comprehensive School but both South Wales Police and ‘GoSafe- Wales Road Casualty Reduction Partnership’ were unable to confirm whether this camera was in use. A Speedwatch volunteer who wanted to remain anonymous said: “The scheme came out of discussions with police about what to do. They came to us and proposed the scheme and for volunteers to take part.

“We all had to go through vetting and training from the police, as well as the police doing risk assessments on the road.

“So far we’ve done seven sessions, we have to co-ordinate amongst ourselves when we can go as we prefer to go in groups of four. The more people we get involved, the more active we will be.”

Since forming in December, the group have found 28 drivers doing over 36mph and seven doing over 40mph. There was also one vehicle travelling too fast for the monitor to pick up the speed. The volunteers are remaining anonymous due to the reaction they have received from the public.

“In terms of feedback, we have had some people who have shouted abuse and been really unhappy. I’d say the majority of people are neutral about the scheme but some people have been positive and have shown support when we are out and about,” said one.

“At the end of the day, we were offered an opportunity to do something about a problem, we’re actually getting out and doing something about it rather than standing on the side-lines.”

Another volunteer highlighted the benefits the scheme was having on the community.

“It is run by the community for the community. It’s helping to build a consensus that lower speeds are better wherever cyclists, pedestrians and motor vehicles mix,” they said.

“It is helping to make the roads safer for our children and vulnerable residents, as well as making the villages more liveable places.”

As the group are acting as a speed deterrent, in order for authorities to have an accurate picture, they are not allowed to operate while ‘GoSafe’ vehicles are in the area.

Speaking of the scheme, ‘GoSafe’ said: “Speeding is a concern for many of our communities and Community Speedwatch is a way for communities to record the level of speeding in their local area which could highlight specific areas where more traditional speed enforcement is needed.

“Equipment is supplied and funded by community funding or by the Police & Crime Commissioners, depending on the area with training and support from GoSafe.” Rod McKerlich, a Radyr conservative councillor said: “The volunteers have to be very careful, private citizens cannot enforce the law and so if they are seen to be vigilantes then this creates a lot of tension in the village.

“I think the scheme is a good idea if it is done sensitively and kept under control – which I think it is.

“I sympathise with the police when it comes to the cost of running this operation. To me, it seems this problem would be answered should they install another fixed camera.”