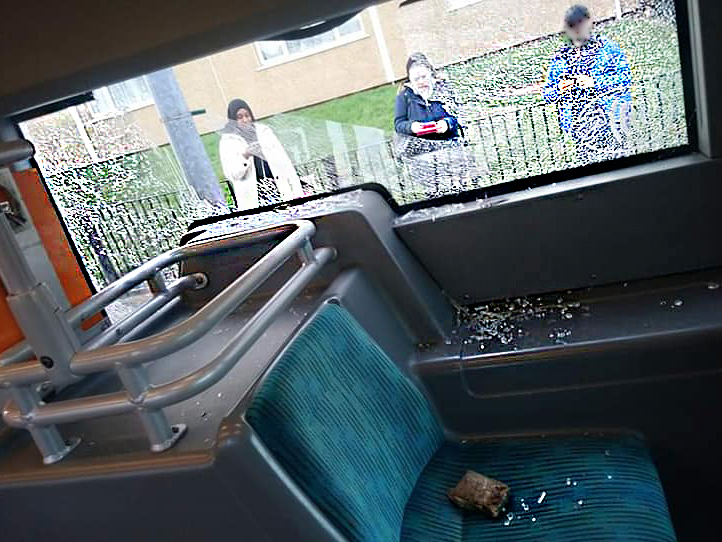 A brick was said to have been thrown at a window on Sunday at 5pm.

AN ELEVEN-YEAR-OLD girl now fears catching the bus to school after being among the victims as two Cardiff Buses were attacked with bricks.

Both attacks took place on the same bus service in Rumney in the space of 48 hours.

The 45 St. Mellons bus route was targeted on Sunday around 5pm on Rhyl Road and on Tuesday evening at 7:15pm on Greenway Road.

“She (the daughter) was just sat on the bus with her friend, on the seat behind where the brick went through,” said Ms Noctor, aged 35.

“It literally just missed her, she was shaken up by and she also didn’t want to get the bus to school the next morning.

“You’re not even safe on a bus – it’s disgusting.”

Morgan Philip, 17, from Rumney, was on also Sunday’s bus.

The waitress at the Cross Inn Pub said: “I was on my way to go out with my friends and I was on the bus, where Rhyl Road is.

“We were going down the hill and all we heard was a bang at the window and then the window was shattered.

“Someone was sat right next to the window, luckily it (the object thrown) didn’t go right through.

“I couldn’t see anyone at all, they must have been hiding and then thrown it.

“As we were going further into St. Mellons, the window smashed properly on its own.”

Ms Philip condemned the behaviour as childish and ridiculous. Mel Woolnough was smoking outside when she saw three boys initially rolling tyres down Greenway Road.

The 57-year-old from Greenway Road said the youths stopped rolling tyres and targeted the bus when it pulled out of the bus-stop.

She said: “A bus pulled up and as the driver went to pull off, two stones were thrown and shattered the window.”

The bus stop is next to a raised hill and, according to Ms Woolnough, this is where the youths threw from.

The grandmother-of-two added: “A lot of people are saying that they aren’t going to catch the bus anymore.

“They are saying ‘what if we had our grandchildren on the bus, or our children?’ It is unknown whether the windows were smashed by the same people.

South Wales Police said Cardiff Bus has not reported the incidents to them.

Cardiff Bus has refused to comment on the matter.