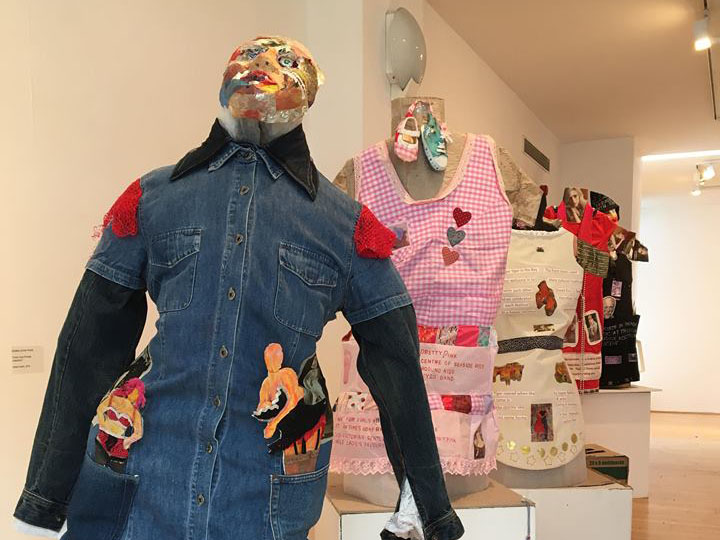 NESTLED amongst the Victorian architecture of one of Cardiff Bay’s busiest streets, BayArt gallery stands out.

Contrasting the grandeur of the building in which it is set, the simplicity of the gallery’s glass entrance is inviting.

Taking refuge from the unseasonably warm February sun, I found myself in the gallery.

It is currently hosting an exhibition called ‘Six Artists’, a partnership program between with Disablity Arts Cymru.

On entering, I was instantly struck by the diversity of the work.

To my left were mannequin like figures, adorned with textiles and poetry. To my right was a computer screen which seemed to be playing a video on loop.

After spending a little while digesting the art, I spoke to ‘Artist Curator’ Phil Nicol. While the artists shared no common ground other than being a part of Disability Arts Cymru (and coincidentally all being women), there were definite elements of cohesiveness amongst the work.

“There isn’t a theme as such, but I think a lot of the work is autobiographical – it’s about the body, touch, movement,” he said.

Some of the artists use their work to reflect upon their disabilities, while others are investigating material itself. They are mirroring its physical capabilities against their own and using the materiality as a metaphor.

“What we offered the artists was that they could each present and explore their own cohesive body of work, with no limitations so to speak.”

“I don’t think some of them had necessarily been shown professionally before. The partnership has been a really good opportunity.”

For many, disability is too often treated as a defining feature. However, wandering through the gallery this was so clearly not the case.

Some of the work seemed to acknowledge the artists disability through the idea of ‘selfhood’, while simultaneously dismissing it.

Vivi-Mari Carpelan is one of the artists whose work is displayed in the gallery.

After relocating to West-Wales in 2010, she was unable to pursue a career due to declining health. She now uses her artwork to visualise her struggles and explore the idea of ‘self-exposure’.

“My artistic work expressed paradox as a key to change, transition and transformation. As a marginalised person with a condition that is mostly invisible to others, it’s especially important for me to help make the invisible visible,” she said. This theme of making ‘the invisible visible’ is littered throughout the exhibition.

The space to the back of the gallery is dedicated to the work of Rachael Wellbeing.

Titled ‘Landscape of the mind’, the series consists of three large canvases constructed using paper pulp and acrylic paint. These represent the conscious thought drifting through the process of meditation.

She says that her work is “neither representative nor a state of being, it resides in the liminal space between meditation and the conscious.” Most of the work in the gallery focused on the relationship between identity and physicality.

A closer look at the figures that had struck me on entering the gallery seemed to confirm this.

Created by Gemma Jayne Paine, the figures are part of a textile piece looking at old myths.

Focusing on themes such as identity, and cultural stereotyping, the work looks at topics such as ‘pink for girls; blue for boys’ and tributes to famous women. Other artists included in the exhibition are Lou Lockwood, Jo Shapland and Jan Williams.

Similarly, these look at memory, adaption to disability, community and connections.

Wandering through the gallery quickly made me realise both the naivety and ignorance I subconsciously held towards the support available in the creative industries.

I set out to speak to someone from Disability Arts Cymru to learn a bit more about the work they do and how the collaboration with the gallery came about.

Sara Beer, the South Wales Regional Officer for Disability Arts Cymru, offered to speak to me.

“We work across all arts forms and are revenue funded by the Arts Council of Wales as the lead organisation for Disability and the Arts in Wales.

“We really believe in opening up access and opportunity, celebrating diversity, nurturing embryonic and established high-calibre disabled practitioners and inspiring change throughout Wales,” she said.

The partnership with BayArt came about after Sara enquired about the possibility of holding their annual exhibition there.

“An open exhibition didn’t fit in with the galleries programme of work but Phil and Maggie were interested in curating an exhibition with work from a small number of our members,” she said.

“We’re really pleased with how Phil has curated things; the gallery is a really nice space to be in and it has been such a great opportunity for our members.”

Despite only being a public gallery since 2002, the Grade II listed building on Bute Street has a rich art heritage.

The Association of Artists and Designers in Wales took possession of 54b/c Bute Street in 1980, using it primarily as a studio space. This group later went on to be known as ‘Butetown Artists’.

By 1990, the building had severely deteriorated and was in a critical state, the group had a choice. Either leave and find a new space or try and find a solution. They chose the latter.

Re-establishing themselves as a ‘company limited’ by guarantee, ownership of the building was gifted to Butetown Artists by both Cardiff City Council the trustees of the Association of Artists and Designers in Wales.

After funding projects raised the £1,000,000 needed for restoration, the building finally opened as a public gallery in 2002.

Today, it holds around four exhibitions a year.