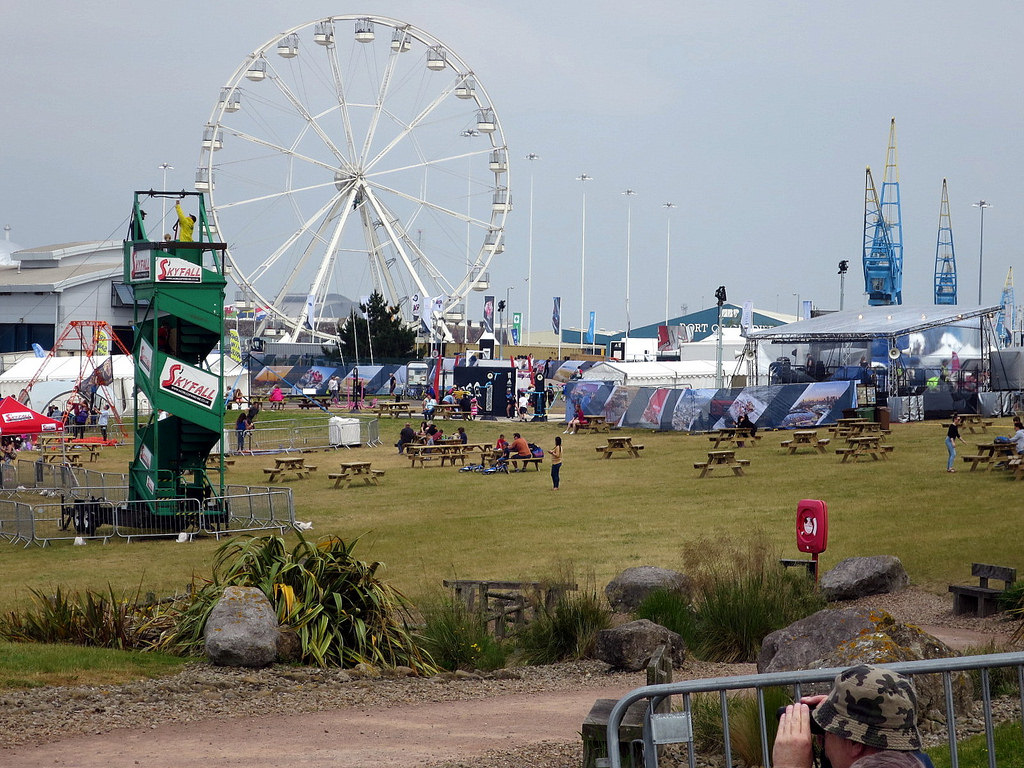 MORE than £1m was spent by Cardiff Council creating an event space for the Volvo Ocean Race in the bay last summer.

A council spokesperson confirmed that the costs were for the decontamination of the land and the event space that was created at Alexandra Head, next to the skate park and Alexandra Dock.

A great drone shot of Alexandra Head, Cardiff Bay where we are constructing an events area for the Volvo ‘Around The World Yacht Race’. This is one of our projects being delivered through the @Scape_Group's National Civil Engineering & Infrastructure Framework. #teamscape pic.twitter.com/LNrRIjShxk

Contractors Balfour Beatty were paid £1,159,064 by the council for an event area that was re-surfaced for the Cardiff stopover of the 45,000 nautical mile round-the-world yacht race. The area is not currently being used.

The race started in Alicante, Spain, on October 14 2017 and the crews made 12 stops at cities including Cape Town, Melbourne and Hong Kong with the winners taking just over eight months to complete the course.

Cardiff was stop number 10, with the crews arriving on May 29 and leaving for Gothenburg, Sweden, on June 10.

It's a glorious day at the Volvo Ocean Race Village in Cardiff Bay ☀ sadly it's the final day, as the fleet departs for Gothenburg at 4pm. Join us for sun, selfies and farewells ⛵ #Cardiff #CardiffStopover #VolvoOceanRace pic.twitter.com/pZFTg8amMS

It was the first time the event stopped in Wales in its 45-year history.

Volvo, sponsor of the race which takes place every three years, said that Cardiff was the “best stop over,” according to a source within the Cardiff Harbour Authority, who confirmed the event area is not being used “at this moment in time.”

The land at Alexandra Head is owned by the Welsh Government – which spent £3m bringing the race to Wales – and the area was also used for the Cardiff Bay Beach Festival during July and August last year.

Nick Bice, Director of Boats and Maintenance for the Volvo Ocean Race, said: “There are good stopovers, and there are great stopovers – and Cardiff was a great stopover.”

Figures provided by Cardiff Harbour Authority show that 175,000 people visited the race village during the two-weeks it was open.

Speaking at the event last year, Cardiff Council Leader Huw Thomas, said: “The Alexandra Head site has been a magnet for crowds over 14 days, and with water on both sides and easy accessibility, I’m sure it will be used for a variety of events in the future.”

Concerns have been raised in the past about council-owned developments in Cardiff Bay being underused.

The Doctor Who Experience at Roath Basin closed in September 2017, costing Cardiff Council £1.147m, and the building is still not in use.

The council recently confirmed that it had no plans for re-open the old Doctor Who attraction, but that it was hosting the Dr Who Film Tours and Exhibition, in partnership with BBC Worldwide, at Cardiff Castle this summer.

NEWS: Doctor Who Experience is returning to Cardiff! ?

Wales Online have revealed that the Council have plans to open up a new Doctor Who exhibition in Cardiff.#DoctorWho #JodieWhittaker pic.twitter.com/ujEDDcbQgZ

The move is part of the council’s ‘Securing the Future of Cardiff’s Heritage Buildings’ initiative, as it aims to plug a £24m gap in its historic buildings maintenance budget.

However, local businesses attributed a boost in sales to the Volvo Ocean Race.

Paul Shone, sailing fan and owner of the Ty Rosa Bed & Breakfast, Grangetown, told The Cardiffian that he rented two of his ten rooms to fans who were travelling to each leg of the race.

Speaking about the morning that the teams arrived in Cardiff Bay, he said: “Our Canadian guests went to see the yachts come in and I went to the event later in the day.

“They said only 12 people turned up to watch them come in, very poor I think. I remember them saying that everywhere else they went had crowds of people.”

Jennifer, 21, from Heath, works at Coffi Co in Cardiff Bay and remembers the Volvo Ocean Race because she works all the major event days.

“We were 100 percent busier because of it,” she said, before adding that the best day for business is during the Cardiff Half Marathon, in October.

Reception staff at The Exchange Hotel in Cardiff Bay, who wished to remain anonymous, said that they remembered the event well because some of the teams stayed at the hotel.

Looking at their records, they said that 90 percent of their 50 rooms were booked by people associated with the race, and that they remember other hotels in the area reporting a similar level of bookings.

The week of the race was definitely busier for them than the same period in 2017.

Carwyn Jones, who was First Minister of Wales when the event took place, said: “It’s great for us to have the Volvo Ocean Race in Wales, it’s worth £12m to our economy, and is one more big event for Wales.”

But not all politicians agree with his assessment of the event.

Neil McEvoy, independent councillor for Fairwater, said: “Services are being cut to the bone by a Labour council, yet they can blow over a million on a yacht race. It defies belief.”