Home > News > Pontcanna residents get together to tackle problem leaves

Pontcanna residents get together to tackle problem leaves 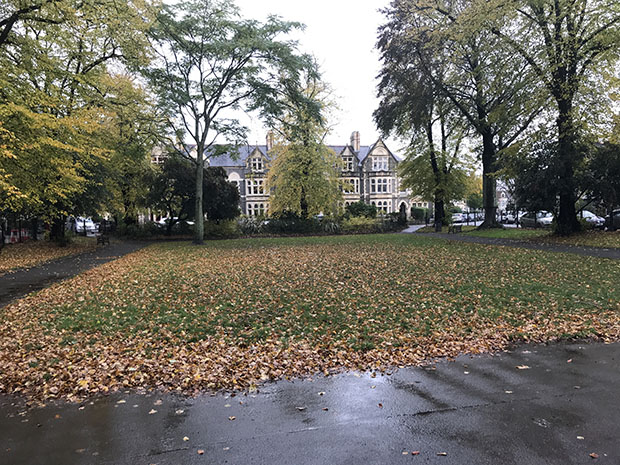 THE annual Big Sweep has begun in the Pontcanna and Riverside areas to combat the problems caused by falling autumn leaves.

The leaves block drains, causing water to build up on the streets, as well as being a general slipping hazard for pedestrians.

Over the past four years, neighbours, in collaboration with the council, have attempted to sort out the problem by heading to the streets and clearing the leaves with shovels and brushes.

The Big Sweep targets streets that are lined with trees and therefore cause the greatest problems for locals.

Jacquie Williams, 56, of Conway Road was complimentary of the event.

“I think it is an excellent idea. I think it’s inclusive for the community, bringing us together. It’s a fantastic initiative.”

Regarding the slipperiness of the leaves, Ms Williams said: “It’s just crazy, especially on Cathedral Road.

“I was walking to town the other day and almost slipped a couple of times.”

Cathedral Road, along with Pitman Street, Plasturton Avenue, Hamilton Street, Wellington Street and South Morgan Place are due to be swept by the Cardiff Council cleansing teams as usual, rather than being involved in The Big Sweep.

On Saturday, residents of Ryder Street, Plasturton Gardens and Plasturton Place gave up their time to sweep the streets to help make their neighbourhood safer.

Conway Road and Turberville Place are due to be swept on November 9, with Talbot Street and Pontcanna Street scheduled for the weekend after.

Neville Street, Despenser Gardens and Clare Gardens will be swept on November 24 and the event will conclude with the sweeping of Severn Grove on December 1.

Sally Davies, 56, who lives on Turberville Place, said the leaves do cause an issue but the community aspect is positive.

“They do clog up the drains and then we get a lot of water on the streets. It becomes quite slippery for elderly people and kids.

“It is good to get the community involved in that sort of thing.”

During the sweeps, which tend to start around 10am, residents brush the leaves into piles.

The council then collect the leaves using mechanical sweepers and a large truck.

“I think it is fantastic to bring the neighbours together and do our bit to help the council,” said Mari Gooberman, 48, of Talbot Street.

“It (the leaves) tends to block up the drains and creates low level flooding.”

Regarding the event, Councillor Iona Gordon said: “For the past four years we have found residents in Pontcanna enthusiastically clearing leaves in the communal Big Sweeps.

“It is hard work, especially if the leaves are wet and heavy to shift, but so rewarding to see the results of their efforts, a street that is safe to walk along.

“Residents use their own sweeping brushes and last year we noticed some were using snow shovels and these are actually a better implement for both dry and wet leaves.”

#cardiff, Leaves, Pontcanna, riverside, The Big Sweep
You may also like