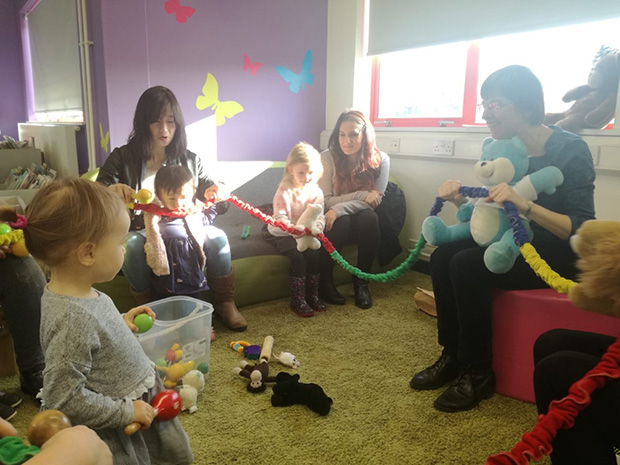 CARDIFF libraries are taking part in the Big Welsh Rhymetime – helping babies, toddlers and parents to develop their language and social skills.

Around 2,300 children are expected to take part in the celebration of Welsh rhymes across Wales at venues including a range of libraries such as Canton, Ely and Central.

They will use Welsh and English rhymes and engage parents to support children’s physical activity, co-ordination, confidence and speaking and listening skills.

BookTrust liaise with Bookstart, which is funded by the Welsh Government. It provides English and Welsh book packs for babies and toddlers at their respective six- and 27-month health check-up.

Margaret Holt, Bookstart co-ordinator, said: “It’s nice to have these promotions to support the importance of cheering rhymes and songs. It’s not just about the educational side, but socially and for the baby’s development. It creates a bond with the parent and child.”

She said: “The rhymes and songs particularly are ideal ways of encouraging non-welsh speakers to enjoy the language, since you’re playing with words.

“Songs break down the barrier of thinking ‘I can’t access Welsh at all’.”

Although it’s aimed at babies and toddlers, parents can also take part.

“The parents will have their babies on their knees or cradled. Some of the rhymes will engage them too – for example, Round and Round the Garden, where you show basic language repeated and the parents show by action,” said Mrs Holt.

“It’s such a lifelong skill. It’s a great way to meet new people and for mums and dads who have never thought of coming to the library.

“The babies and parents take part with interactive things like scarves and other props.”

“Songs such as Little Miss Muffet, for example, where you wouldn’t hear words like ‘tuffets’ and ‘curds’ and ‘whey’ anywhere else. They carry really rich language in them.”

Mrs Holt said that 12 sessions have been held already with around 15-20 left this week.