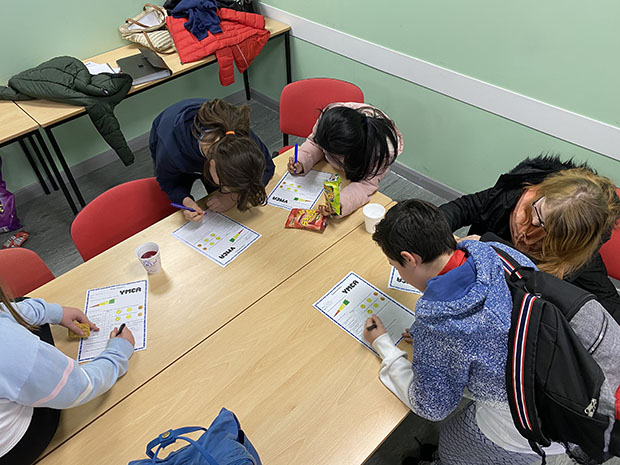 ‘I know it’s bad, but sometimes I take days off school just to catch up on sleep,’ says Cari, 13

IN Cardiff, there are children as young as seven caring for parents and siblings who are unwell, have a health condition, or other additional needs.

The YMCA Young Carers Project, based in Roath, was set up over 10 years ago to give these children a break from their caring role at home.

Around 15-20 children from all over Cardiff come to the youth club on Wednesday nights from 6pm to 7.30pm and meet other children like them.

The club is based at the YMCA Plas on City Road and provides snacks, drawing materials, games rooms and a sports hall.

I have been invited to visit the youth club, and even from outside I can hear children screaming and shouting in excitement.

Katie Gregory, 32, meets me at the door. She is one of the YMCA workers on the young carers project and has helped run the youth club for nearly two years.

“Come into the games room,” she says, ushering me inside.

She nods towards a door at the end of the corridor: “You don’t want to go into the sports hall – you’ll end up with a ball on your head!”

Katie introduces me to three girls sitting at a table in the games room. They are aged between 11 and 13, and all of them care in some way for their parents and/or siblings. Cari, 13, cares for her whole family.

“I’m the parent of the house, I sort of look after everyone,” she says.

“My mum had a tracheostomy, so now she can’t speak and she needs a machine to clear her airway, my dad suffers from severe depression, and my younger sister fell in a fire a few years ago, so she needs surgery every two years on her burns.

“My older sister has a muscle condition and depression, and I’ve got anxiety myself,” says Cari.

Her friends at the youth club, Colette and Kallie, both care for their brothers and Colette also looks after her mum.

“She gets really stressed out and my little brother just doesn’t learn, he’s eight and still can’t get himself dressed,” says Colette, 12.

She is firm friends with Kallie, 11, who has been going to the youth club for three years.

“Colette lives over the bridge from my house, and if there’s something really wrong during the night we’ll phone each other,” says Kallie.

She sees something funny on her mobile phone and shows it to Colette, then they start chatting between themselves.

As part of the young carers project, the YMCA also takes the children out on day trips.

“We do loads of things with them,” says Katie. “Ice skating, bowling, the cinema, white-water rafting, indoor surfing, Drayton Manor, and the butterfly zoo.”

However, the project recently lost its funding, so Katie and her colleagues have only been able to run the youth club lately.

They’re about to start a new partnership with Cardiff Family Advice and Support, she says, so during the Easter holidays they plan to take the children to Noah’s Ark farm zoo.

“We’re trying to make it easier for them to make new friends and I think it’s really important that they don’t feel so alone,” she says.

“It’s basically about allowing them to have fun and be children, because they take on a lot of extra responsibility.”

In the games room, children ranging in age from seven to 13, are playing with Lego, board games and a Nintendo Wii. A swaying Jenga tower topples over with a crash.

Although there is a separate youth club on Saturdays for children aged 11+, many older children still come on Wednesdays to play games and see their friends.

“It’s meant to just be for primary age children, but we’re not very strict. We just want them to come here and enjoy themselves,” says Katie.

Cari worries a lot about school and checks her bag several times before going to bed, just to make sure she’s packed everything for the next day.

“I find it hard to get my homework done, because I have to help out so much at home, and I don’t want to turn the printer on late at night and wake everyone up,” she says.

“If you don’t hand your homework in you get a CAM, that’s like a punishment point, and when you have five of them the teachers ring home and ask to speak to your parents.

School trips are also difficult, because you’re not allowed to use your mobile phone and Cari worries about her family when she’s away for more than a few hours.

She likes to keep in contact, but due to her own health problems, she will have to go into hospital for surgery soon.

“What if worst comes to worst and I go into cardiac arrest or something, what would my family do without me?” she asks.

“I come here to enjoy myself. My friends have time to socialise and go into town or whatever, but I find it really hard to have time to do that.

“All my friends think ‘oh, it’s just a few chores – maybe one or two extras’ but they don’t understand how many medicines I have to sort out every day.”

“It takes me a while to open up and tell people what it’s really like, and when your friends don’t believe you, it really hurts.

What would make things easier? I ask her.

“Well, it would be nice to have some tips,” says Cari.

“I don’t feel like we get enough support and sometimes I have to take days off school just to catch up on sleep.

“Last week I had a day when I thought there was nothing on, but I accidentally missed a test.

“I think we need something to relieve our stress with being young carers.

“I cycle to school and back, and it helps clear your mind. But once you get back home, you’re like ‘Ugh, we’ve got more to do’.”

It’s nearly half seven and around me in the games room the youth club is starting to wrap up.

Katie gives out evaluation forms, where the young carers can say whether they enjoyed their night at the youth club, and what they would improve.

What will you do when you get home? I ask Cari.

“I’ll have to sort out the medicines. We’ve got this big bag full of them and I’ll have to look through it to find one tablet for one person and another one for another person,” she says.

Cari’s mum is able to pick her up tonight because she’s feeling well enough, and Cari gets a text to say she’s waiting outside.

Cari waves goodbye as puts on her coat, then she picks up her bag and leaves the youth club.