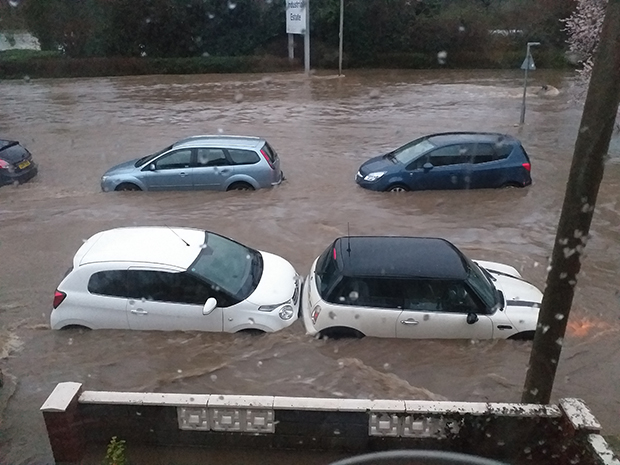 Village hall is full of donations of blankets, clothes, cleaning equipment and toiletries

THE community in Taff’s Well has rallied around neighbours affected by severe flooding during Storm Dennis.

Most donations are being taken to the village hall but the Taff’s Well Inn and Taff’s Well RFC are also taking contributions and offering support.

Carrie Peach, 35, of Rhiw’r Ddar, is a committee member at the village hall.

“The community have just been fantastic,” she said.

“We formed a committee a year ago because this place was going to be knocked down. It’s proved quite helpful because it’s a group of people who can put their heads together for things like this.

“We’ve got a WhatsApp group, we’re always in touch. When the floods happened, there was a lot of stuff circulating on there.”

There are people baking cakes and there is food being provided throughout the day alongside hot drinks.

However, Ms Peach says that it is just as important to simply be there to listen to people.

Dawn, 52, of Oxford Street, agrees with this, saying: “Just talking to other people who have been through the same thing helps.

“Unless you’ve gone through it you can’t possibly understand what it’s like.”

Dawn, who did not want to give her last name, and her son Jake, 24, are among many who have been forced out of their homes.

Jake was the first to notice something was wrong.

He said: “I woke up half past two in the morning because I thought I heard a noise. I thought it was just a leaky pipe, but then water started coming through the floor.

“I went upstairs and woke mum and dad up and plugged the front door.”

His efforts were to no avail, and the water soon reached heights of up to three metres in the downstairs of their home.

Dawn said: “The water came in so fast. We were like ‘Okay, what can we grab?’ You’re talking things like photos and personal belongings.”

They went upstairs and waited to be rescued by the emergency services.

“You looked down and it was a torrent. Cars were being carried away; the firemen were anchoring themselves to the lamp-posts because the current was taking them away,” said Dawn.

Dawn, her husband and Jake were eventually evacuated by residents driving 4x4s from nearby Nantgarw.

The family have been able to find temporary housing.

She said: “We’re very lucky as a friend has gone to live with her partner for a while and she’s given us her house.

“That’s what tends to happen in an area where you have this kind of community.”

They were able to bring their two dogs along with them unharmed.

Sadly, not everyone has been so lucky with their pets.

Ms Peach said: “People have lost pets; one man found his rabbit’s hutch was floating in the garden. The rabbit had died.

“One man’s dog has drowned. There’s lots of upsetting stories like that.”

Marsha Ward, 49, of the Taff’s Well Inn, said: “There are stories of pets floating in the river and so forth.”

The pub has become one of the three major hubs for donations.

Not content with only collecting contributions from the community and hosting 90 people in the pub on Sunday, Mrs Ward and her family have taken a more active role in providing help.

Mrs Ward said: “My 16-year-old son went off with a few locals and rescued people from the basements of their building along with cats and God knows what else.

“My son brought a Polish family back with him. There was a mother, daughter and a son – grown-up children.

“They were very wet, very cold and in shock. They had to be pulled through their window to get them out. We immediately gave them blankets, a change of clothes and a hot bath.

“We’re not a B&B, we’re not licensed to do that so we can’t keep them long term. But there’s a bed for them for as long as they need it.”

Members of Taff’s Well RFC have also been active in gathering supplies and clearing the area. 

Mr Rees said: “An amazing number of people have been making donations and we’re acting as a hub that both receives donations and then tries to distribute them to people in need.

“People are seeing that there is support available here through the rugby club.

“They’re coming in to collect things they need but we are also taking some stuff out to the areas that have been worse affected.”

The club have been active on social media, letting people know that they are doing all they can to help.

“I think that what has been very striking is the suddenness of things. In a few hours over Saturday night and Sunday morning, people’s homes were completely devastated,” said Mr Rees.

“The whole range of people have been affected across generations, from the elderly people right down to toddlers and babies.

“It’s very distressing to see friends who have lost their homes and are now having to face up to the task of clearing things out, sorting out insurance and getting tradespeople in.”

Mr Rees was optimistic the area would recover but warned that “it takes a while for people to get over the emotional blow”.

Dawn said: “The weirdest thing for me is, you see it on TV, and you think ‘oh that’s awful’ and then you get on with your life.

“Having experienced it now, it’s so devastating. Everything you worked for, everything you’ve done is gone.”

However, she added that the response from residents has been overwhelming.

“I’m on the committee here and we were trying to rebuild the community here, so to be on the receiving end of it is really humbling because now I’m the one who’s in need.”