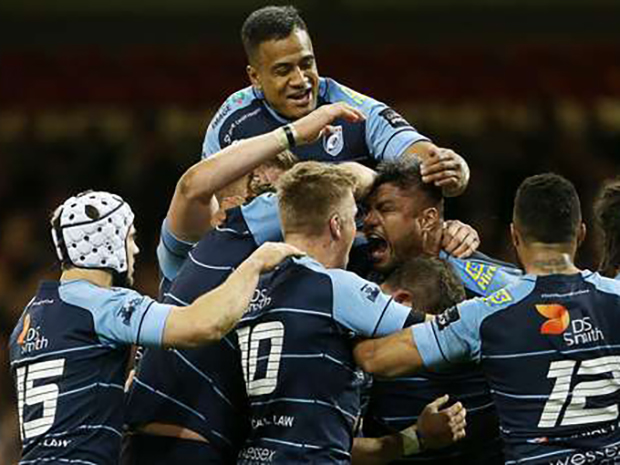 THE Cardiff Blues face a stern test on Friday night as they travel to Pro 14 Conference B leaders Edinburgh.

Seb Davies and Hallam Amos return from the Wales squad and retain their places from last weekend’s comeback win against Benetton.

Winger Aled Summerhill and lock Rory Thornton are the other changes as the Blues try to close in on the play-off places.

The win against Benetton on Sunday was their first since a Boxing Day victory over the Dragons although they have only played two fixtures in between – including a narrow defeat to rivals Scarlets.

They fought back from a 12-point half-time deficit scoring four second-half tries to seal a 34-24 win against the Italian side and move to within a point of Connacht in fourth.

However, they will need to be at their best to beat in form Edinburgh, but the Blues do have a good record at Murrayfield winning on their last four trips to the home of Scottish rugby.

“We want to make sure that we pick up points when we’re away and we have won up in Edinburgh before as a group,” said Mulvihill.

“Edinburgh always have a big physical pack and look to contest their kicks. They also pride themselves on the pressure they build in the breakdown.

“They have some excellent outside backs and they are a pretty complete team.

“They have an astute coach and will have a game plan to unsettle us this week but we’re very much looking forward to the challenge.”

The Blues will be hoping for a repeat of the last time they travelled to the Scottish capital.

Finding themselves 14-0 down at half-time the Blues rallied in the second half and two tries from centre Jason Harries secured a memorable 19-17 victory.

Harries, a former Edinburgh player, starts once more against his former club looking to repeat his heroics from a year ago.

Edinburgh come into this fixture off the back of a 41-14 thumping of Connacht and have won their previous four matches.

South African Duhan van der Merwe is the man the Cardiff defence will have to look out for as the winger has touched down in his last five matches.

“The weather will be a little bit better than last two weeks, but we need to be really functional and practical in how we play. We just need to go and win the game – do whatever it takes to win.”

Elsewhere in the Pro 14, Ospreys’ trip to face Zebre in Parma has been postponed because of the spread of Coronavirus in Italy.

Ulster’s game against Benetton in Treviso has also been cancelled.

In games that are going ahead, on Saturday Scarlets travel to Limerick to face a tough Munster side in a clash between second and third in Conference B, while the Dragons host Toyota Cheetahs at Rodney Parade in Conference A.