Zoe shares her story to help others with eating disorders 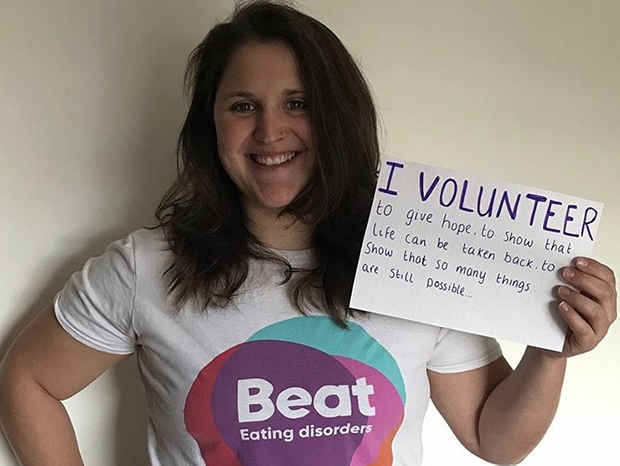 ZOE John grew up in a small village in Pembrokeshire, but now stays in Cardiff. She lived with various eating disorders from her mid-teens to early 20s, before becoming a Beat ambassador in 2016.

The voluntary role involves visiting schools, universities and GP practices to share her experiences, give advice and encourage people to seek help.

“Speaking about your own experience sometimes feels vulnerable, but nobody’s going to know that people are suffering unless we talk about it,” said Zoe, 27.

“I want to highlight the fact that Beat exists, so people know where to go for help if they need it.”

Zoe’s first eating disorder was bulimia at the age of 14, but she struggled with body image from a remarkably young age.

“I had low self-esteem from the age of about six. I remember wishing to be skinny every birthday – that was all I wanted.

“I used to sit in my bunk bed thinking ‘what if I were to cut my stomach off – would it heal?’, I just wanted it gone.”

Zoe’s bulimia continued for about six months, but neither her nor her parents knew what was wrong – or how to deal with it.

“At that time, there was no education on eating disorders, in fact there was nothing on mental health at all,” she explained.

“The only health education we had in secondary school was how to put a condom on a banana and the concept that being fat is bad – that was it.

“It was really lonely, but I didn’t know what it was, so I just didn’t seek any help. I just kind of recovered on my own.”

At 19, Zoe developed a condition known as OFSED, i.e. Other Specified Feeding or Eating Disorder. This can be experienced in different ways and therefore does not fit into the category of anorexia, bulimia or binge-eating disorder.

For Zoe, OFSED took the form of obsessive exercise coupled with anorexic tendencies, which would sometimes lead to her fainting from over-exertion.

She said this behaviour was her way of dealing with an emotionally abusive relationship, but also related to her goal of fitting into a lower weight category for kickboxing, which she trained for up to three times a week.

“Because I became anorexic when I was overweight, people congratulated me.

“When you’ve always had low self-esteem about the way you look, you think ‘this is great, this is what health is’, but losing weight shouldn’t be something we’re holding up on a pedestal.”

After the OFSED period, Zoe ended her relationship and became isolated. With no social network and a full-time job, she relapsed to bulimia for another six months at the age of 20.

Following a period of partial recovery, an incident with her ex-partner triggered a period of binge eating and over-training at the age of 23.

Zoe’s ex, who was 10 years older, began stalking her on the way to work and was eventually arrested by riot police.

After the arrest, Zoe was forced to tell her family everything. She also posted on social media to warn others about her dangerous ex-partner and share her concerns about the effects of the relationship.

“Once I started to tell people, the plug just came out. It was good, because I couldn’t have recovered without it,” she said.

Despite occasional “bad mental health days”, Zoe is now more or less fully recovered and has not given in to any negative thoughts despite further trauma, including the loss of a friend and four grandparents.

“I think the main thing that helped me was American football. It gave me a new network of friends that I could talk to and helped me to realise that my body could be applied in a positive way,” she explained.

“It was a major part of me, and it gave me a sense of responsibility to my team. I needed to be strong for them, so I didn’t relapse.”

Despite this, she still worries about the consequences of her bulimia, which include erosion on her teeth and the possibility of diabetes or even infertility – research is ongoing, but there is a chance that the female reproductive system can be negatively impacted by the condition.

“It’s not necessarily about food. It can be about trauma, big life changes – I think unless people have the time and an appropriate place to talk about those things, the eating disorder won’t go away,” she explained.

As such, charities like Beat which provide affected individuals with someone to talk to are especially important.

Beat was founded in 1989 and currently has seven Welsh ambassadors, many of whom try to reach rural communities where doctors’ approaches can be outdated.

According to Zoe, the doctor at her village in Pembrokeshire is still the same as when she was much younger.

Other issues include a lack of funding, training and access to inpatient care.

Research undertaken by Beat in 2017 found that people in Wales wait an average of three years and one month between onset and the start of treatment, while junior doctors receive only two hours of eating disorder training in their entire degree.

Eating Disorder Awareness Week is designed to draw attention to these issues and encourage fundraising through social media campaigns and events in schools, universities and workplaces.

It will be marked by a campaigner action day at the Welsh Assembly on March 4, where Beat will call for the full implementation of the Welsh Government’s 2018 Eating Disorder Service Review recommendations.

These include a significant investment into eating disorder services in Wales, as well as a reorganisation which will introduce a clear set of principles and prioritise the medical needs of patients.

The event is being sponsored by Bethan Sayed AM, of Plaid Cymru, the chair of the Cross-Party Group on Eating Disorders.

A representative of Beat, Jo Whitfield, said: “We recognise the action the Welsh Government has taken in publishing the recommendations; however, commitment is now needed for their fully funded implementation.

“The sooner someone gets treatment, the more likely they are to make a full and sustained recovery, with a lower the cost to the NHS.”

Beat’s website has free chatrooms, text services and phone lines, meaning it is easy for anyone, including people whose local services are lacking, to get in touch.

There are also different groups for parents and carers or concerned friends.

charity, eating disorders, mental health
You may also like