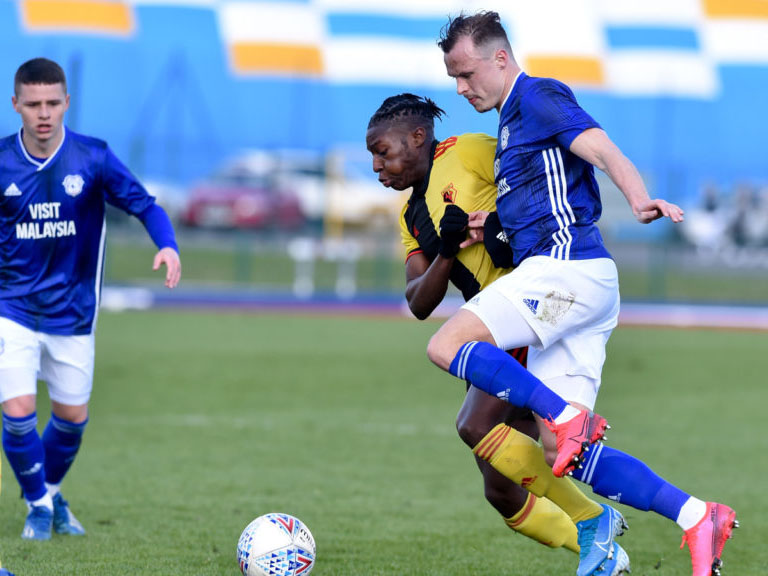 A STRONG Cardiff City U23 side defeated Professional Development League South leaders Watford 3-1 on Monday afternoon to give Steve Morison his second win in as many games as manager.

The Bluebirds’ starting XI featured senior players Sol Bamba and Neil Etheridge, but it was the young guns who impressed at the Cardiff International Sports Stadium, with Isaak Davies and Mark Harris both getting on the scoresheet as first team boss Neil Harris looked on.

A first-half brace from Davies put City in a comfortable position, while Harris put the game beyond all doubt late on after Sam Dalby’s goal had threatened a Watford comeback.

However, the win was marred by another setback for striker Isaac Vassell, who pulled up 24 minutes into his return from injury.

Victory pulls Morison’s men up into fourth place in the PDL South, while Watford missed their chance to re-establish a firm lead at the top of the table.

The Hornets had only suffered five losses all season ahead of this fixture, but had only picked up two points from their last three games, while Cardiff were buoyed from last month’s win over rivals Bristol City.

The teams’ differing confidence was evident from the off, with the young Bluebirds starting brightly and putting their opponents under pressure.

After sending a free-kick sailing over the bar, winger Tom Sang nearly set up the game’s first goal in the 19th minute, whipping a dangerous ball into the box which just evaded the boot of Vassell.

Moments later, Neil Etheridge was called into action for the first time, as Hornets captain Callum Whelan played in Henry Wise, whose shot was tipped away for a corner by the Philippines international.

A Cardiff counter-attack from the resulting corner saw Brad Smith find the onrushing Vassell to set up a one-on-one with Watford goalkeeper Adam Parkes, but the striker immediately pulled up clutching his leg in agony.

Hitting out at the sport park’s hurdles as he limped from the pitch, a visibly frustrated Vassell was consoled by first team manager Harris, who came down from the stands to put his arm around the 26-year old.

It was yet another setback for the striker on his return from injury, having been sidelined since September with what is believed to be a torn quadricep muscle.

However, it was the introduction of Vassell’s replacement that changed the game in Cardiff’s favour, with Davies providing a constant attacking threat and linking up well with Harris and Sang.

After being denied by a fine save moments earlier, Harris played in Davies, who cut through the Watford defence to slot it past Parkes and into the bottom left corner to open the scoring.

The lead was deserved, but Davies’ fine finish was nearly immediately cancelled out as Etheridge spilled the ball under no pressure as the Hornets swarmed the box, only for Bamba to hurriedly clear.

However, there was just enough time before the break for the home side to double their lead, as Sang fired in another dangerous cross from a corner.

The ball was met by Bamba, who flicked it goalward to be turned in by Davies from close range, and to put the Bluebirds in a comfortable position at the interval.

In the second half, it was Watford who came out fighting, and the visitors found their way back into the game just before the hour mark through Sam Dalby, who flicked in off the post to threaten a comeback.

In a frenetic period, Cardiff held their nerve in defence, and came close to scoring themselves, as Davies pounced on Teddy Perkins’ mistake to bear down on goal, only for Parkes to intervene again.

After Watford piled on the pressure, Harris helped to calm his side’s jitters with two minutes left, striking Rubin Colwill’s floated ball into the box first time to score a third and put the result beyond doubt.

Buoyed this win over the league leaders, Morison’s side now face a tricky task at home to Ipswich next Monday, with the Tractor Boys unbeaten in their last five games.