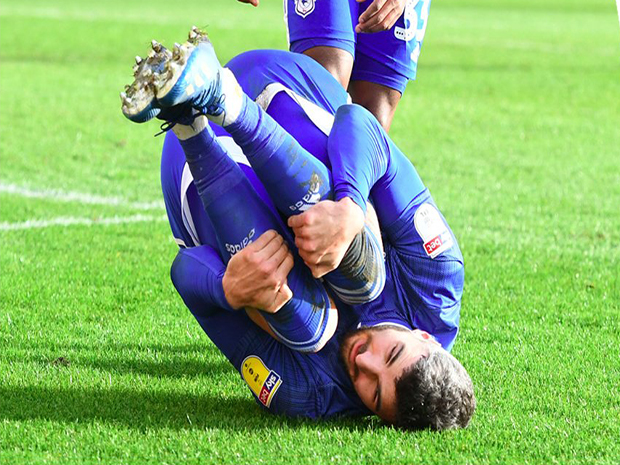 Callum Patterson can’t be faulted but why do forwards struggle so badly at The Bluebirds?

AS Callum Paterson runs off in celebration, his importance to this Cardiff City side is emphasised once again.

His powerful drive has just made it 2-0 to the Bluebirds away against Barnsley, giving City breathing space in the game.

As the final whistle blows, City have held on to that 2-0 scoreline and with it their hopes of a play-off position this season.

Paterson was his typical self at Oakwell, strong in the challenge, a nuisance in the air and he never stopped running. It isn’t hard to see why he’s a fan favourite in the Welsh capital.

If you ask Cardiff supporters who their most effective striker is, the Scot’s name will be the one you hear most.

The 25-year-old’s ability at the top end of the pitch is made more remarkable by the fact he was signed as a right-back, but Neil Warnock quickly changed that.

“When I signed him, I knew he would score six or seven goals as a full-back but what I didn’t know is that he can’t defend,” Warnock said shortly after Paterson was signed.

“So he was never going to be a right-back and we had to put him somewhere else.”

That somewhere else was initially in midfield, but his “ability to score goals from nowhere” as Warnock put it, saw him move even further up the pitch.

He scored 10 goals as City were promoted in 2017/18 and was deployed as a striker in the Premier League, again earning praise from Warnock.

“He’s just a tremendous lad. He’ll play anywhere for me, do anything,” Warnock said after Paterson’s goal gave Cardiff a 1-0 win over Southampton in December last season.

“In the old fashioned days, we used to talk about players running through brick walls, but if I asked him to do that he probably would.”

While Paterson’s commitment to the cause can never be questioned, he struck just four times in the top flight as Cardiff were relegated with the joint second lowest goal tally in the division.

Victor Camarasa and Bobby Reid top scored with five each, numbers which are looking similar to Cardiff’s best performers this term.

The Bluebirds are in ninth, two points off the last play-off spot, but when comparing Paterson to the main striker of the eight teams above them, it doesn’t make for good reading.

Paterson’s five goals puts him behind all eight of his competitors, while his 288 minutes per goal ratio sees him above only Preston’s Tom Barkhuizen, who is registering a goal every 291 minutes.

Comparing the Scot to some of the Championship’s top finishers might seem unfair considering he has only adapted the position during his time at City.

However, a comparison to the main forward at every club in the division, decided by minutes played and goals scored in the striker position, also sees Paterson come out unfavourably.

He is the joint lowest scorer alongside Hull City’s Tom Eaves, who currently sit one place above the relegation zone.

Paterson is also scoring at a less frequent rate than all but five of his counterparts, with four of those representing clubs from 19th downwards.

That is not a criticism of Paterson, but a struggle for goals and in particular a goalscorer is not a new issue for the Bluebirds.

Fan Daniel Morgan, 55, said: “We’re a good side but we’re just missing that top goalscorer. That player with a golden touch in front of goal.”

You could argue that Cardiff have been missing that player since Jay Bothroyd netted 18 times in the Championship in 2010/11.

The season before that, Peter Whittingham scored 20 goals from midfield and before that Ross McCormack netted 21 times in the league.

Since then however, the number of goals scored by Cardiff’s top scorer has dropped off.

What is striking – if you’ll pardon the pun – about City’s top scorers over the past 12 years is how many of them are not actually strikers.

Whittingham top scored three times, while Aron Gunnarsson, Jordon Mutch, Anthony Pilkington, Victor Camarasa and Tomlin, although he will likely be overtaken due to his injury this season, also managed the feat.

It is not through lack of effort that the Bluebirds haven’t managed to find a goal-scoring number nine, with over 30 forwards coming through the door, either on loan or permanently in that time.

However, very few have worked out.

Since Ross McCormack, the last City striker to net 20 or more goals in the league back in 2008/09, consistent goal-scorers have been rare.

Even McCormack is low on this chart, having followed up his 21-goal season with just four goals in 34 Championship appearances during the next campaign.

The chart also doesn’t include those who made less than 10 appearances, such as Andreas Cornelius and Etien Velikorya who registered zero league goals between them.

So what is the reason for the struggle of Bluebirds forwards?

Reid, who was signed from Bristol City after netting 19 goals in the 2017/18 Championship, struggled to make his mark for City, scoring just five times in the Premier League.

Following Reid’s transfer to Fulham in August he said: “I think it was probably best for both parties.

“Maybe the style of play the manager wanted to play didn’t suit me and it was probably better for him and for me if we parted company.”

While you can understand that Reid, a fast forward looking to play on the shoulder of defenders, wasn’t suited to Warnock’s style of play, that certainly cannot be used to explain other cases of striker struggles.

Gary Madine signed for £6 million from Bolton in January 2018 and at 6ft 3in, he seemed like the perfect fit.

Madine endured a tough start to life at City, but Warnock stuck by him and said: “I think he has a major contribution (to make). He will not be everybody’s favourite because he does not score goals, does not do this, does not do that and because we have paid good money for him.”

However, zero goals in 26 league outings, a record all too similar to other former City forwards, shows that Madine was not at the level required.

Strikers will forever be judged primarily on goals, reflected by Neil Harris selling Madine to Blackpool in January.

Paterson is loved by the fans and they will be hoping he can add to his five goals to fire their side into the top six, should the season be concluded after the season was suspended until April 3 due to the outbreak of Coronavirus.

His commitment can never be questioned, but should City miss out on a play-off spot there will be questions about what could have been if they had that player with a “golden touch in front of goal”.