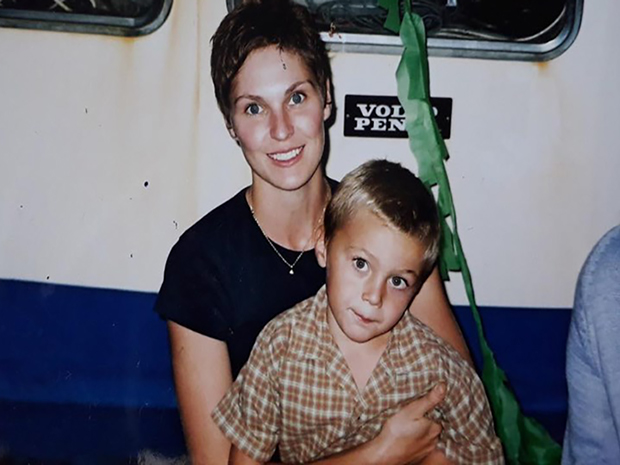 ‘We call each other on the phone, but it’s not the same as giving someone a cuddle’, says Cardiff mum now living in Austria

People are being encouraged to self-isolate and only to leave their houses for the absolute essentials, like food and medicine.

Many companies are now asking their employees to work from home and universities have moved all their teaching online.

But going into isolation presents different difficulties for different individuals.

With all-but-essential travel being advised against, many people cannot get home and will have to isolate alone – away from their families.

Others fear going home because they have elderly or vulnerable people in their families and don’t want to risk infecting them because they may be carrying the virus unknowingly.

People who experience Coronavirus symptoms need to stay at home for 14 days.

Symptoms include a fever, troubling breathing and a dry cough – but it takes five days or more on average for sufferers to start showing the symptoms.

The World Health Organization (WHO) says the incubation period lasts up to 14 days, but other researchers say it may last as long as 24 days.

That means people can carry the virus unknowingly – which is why many families will choose to spend the next couple of months apart.

Others do not even have that choice because borders are being shut down.

This week Germany has taken tight control of the borders with France, Switzerland, Austria, Denmark and Luxembourg.

Nicola Dunn, 43, a care worker, is originally from Cardiff but she now lives in Austria, away from her own parents and her son, Jack.

“I have family in Cardiff and my sister is in Devon. During times like this we all want to stick together, but we can’t.

“We call each other on the phone, but it’s not the same as giving someone a cuddle.”

One of Mrs Dunn’s sons, Jack, lives in Cardiff and Mrs Dunn expressed her concern over him getting sick when she cannot travel to look after him.

“As a mother you just want to be there for your children,” she said.

“It’s really worrying, especially when the UK don’t seem to be taking the same precautions as Austria.”

In Austria, residents have been told to stay inside and only leave for essentials. They are to travel only in twos and are not allowed to enter any wooded areas.

Mrs Dunn, who is a carer, has also been told to take an emergency bag into work, in case a patient is found with the virus and she must remain self-isolated with them in the house after being exposed.

Young people worried about infecting the old and vulnerable

Marie-Claire Alfonso, 22, a Cardiff University student, is worried about going home and infecting her grandmother.

“I’m young and healthy so I’m less likely to show any symptoms, which makes me more worried because I have no idea whether or not I could possibly be carrying the virus,” she said.

“My grandmother is very old and has a lot of health problems including respiratory issues – I can avoid seeing her, but I live with my mum who acts as her carer and needs to see her every day and don’t feel like I can risk giving it to her either.”

Beth Thomas, 23, is also worried about who she may put at risk if she goes home to self-isolate. “I’ve been weighing up the costs of going back home to Swansea,” she said.

“It’s only an hour down the road so I wouldn’t have to take public transport, but quite a few members of my family have medical issues, so I’m worried about carrying it and passing it onto them.

“My dad doesn’t have a spleen to fight off illnesses and has had pneumonia twice before, my mum’s asthmatic and my grandfather is diabetic. I’m trying to figure out when would be best to go back.”

Peter Owen, 87, told his granddaughter Rhi Moore that he is looking forward to “prison” for the next four months.

Older people and people who have pre-existing medical conditions are those who are most vulnerable coronavirus. Megan Stanley, 23, is concerned that her Grandma isn’t taking the spread of the virus seriously.

She said: “My Grandma doesn’t seem that concerned about Corona at all which is making me more worried. She’s 80, only leaves the house once a week, and has diabetes plus other illnesses.

“Her lack of concern worries me because I’m not sure she’ll understand how social isolation will work and will still expect us to visit for hours on end every Saturday.

“The thought of leaving her alone breaks my heart but I could be carrier and not know which would make her so vulnerable. I predict the hardest part will be getting her to understand the ins and outs of social isolation in the first place.”

Despite all worries, there are ways you can still stay in touch with your family, keep them safe and make the most of the self-isolation period.

Many families are staying in touch with daily phone and Skype calls, those in long-distance relationships who can no longer travel are following suit.

This may not be enough for some people, if you are concerned about an older member of your family, please contact the numbers below: