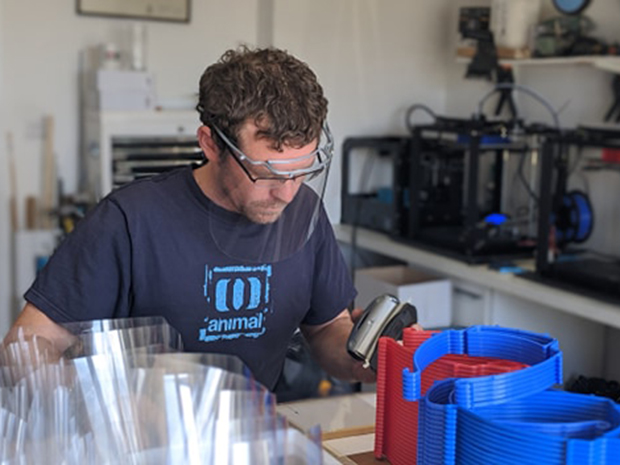 £6,500 raised for materials in less than a week

A PENTYRCH man has set up a voluntary project to make vital safety equipment for local key workers during the coronavirus pandemic.

Richard Blackwell, of Bronllwyn, wanted to give something back to the NHS and other key service workers who are risking their lives to care for others.

He had workshop space and a 3D printer at his home and decided to put it to use by making plastic frames and attaching a sheet of acetate, a strong material suitable as a protective shield, to create visors.

These visors are then given out for free and have been requested by many groups across Wales, including medical centres, hospital wards, care homes and retail staff.

Since the project began on Friday, April 3, Mr Blackwell has used his own money to purchase additional printers and set up a GoFundMe page for the other materials needed.

“I think I was quite humbled when I saw the reaction. I was taken aback, and also a bit scared of whether I could do what I said I would with the donated money,” he said.

“I have no intention whatsoever of turning it into a money-making project. I want to provide support for those on the front line.”

Mr Blackwell, who continues to work full-time from home for Tigerbay Software Ltd in Cardiff, was inspired by his friend David Mordecai.

Mr Mordecai is running a similar project in Swindon. The men are both from Bridgend, which was one of the first areas to benefit from the visors.

“I wouldn’t be doing it if it wasn’t for him,” said Mr Blackwell.

He is being assisted by a small team of people, who self-funded a total of 16 printers and are making visors from their own homes across the North Cardiff area and beyond.

On Saturday, they gave out 160 visors. This rose to 201 the next day and has increased each day since.

Vicky Neil, a property surveyor from Caerphilly, is a good friend of Mr Blackwell. Since being furloughed from work, she has played a big role in sorting through requests and packaging the visors for distribution.

“I kept donating to Dave’s cause. Then on the Thursday I had a late-night conversation with Rich, and by Friday afternoon we were up and running,” said Mrs Neil.

“We expected to get inundated with requests but we did not expect to get the funding that we have. There are a lot of people who have donated multiple times on the page.”

Mr Blackwell’s wife is also helping out while 38 weeks pregnant, and so he plans to take a step back to spend time with his family, supervising while the team continue.

“There are understandably a massive amount of requests and we can’t react to them as quickly as we could at first. I am really hoping they can continue to make as many as possible,” he said.

While the team says the visors are not official Personal Protective Equipment,  safety guidelines are followed to offer an alternative to those unable to access vital safeguarding resources.

Kate Protheroe is a community worker at Harlequin Home Care in Bridgend. Her mother, Kathryn Thomas, spotted the project on her local Facebook page and contacted Mr Blackwell.

“His response was instant. He was absolutely fantastic and supportive and even offered for us to collect a visor that night,” said Mrs Protheroe.

“I shared this with my care home group and the manager and he has now supplied us with 40 visors, which covers all our care workers to protect ourselves and the clients we look after.

“These visors are easy and light to wear and give peace of mind to us and our families. I can’t thank him enough.”

The machines cost hundreds of pounds per day to run and the materials are often in short supply.

The team is extremely grateful to all of the donors, and to the many local businesses who have offered reduced-price materials and donated delivery boxes.

One restaurant owner from Rhiwbina, who has had to delay the opening of his business, has offered use of his premises so that the team will have a permanent distribution base.

”They are getting no income and they still did it. There is no bottom line with this, no one is doing it to make money, they just want to help,” said Mrs Neil.

“It is changing so quickly all the time, but the right people seem to be in the right place. It feels like in the grand scheme of things that this is a drop in the ocean, but anything that is going to protect our key workers means the faster everybody can get back to normal.”

Due to difficulty in retrieving the GoFundMe donations as quickly as needed, there is also a separate community fund being coordinated by Mr Blackwell’s neighbour, Deb Hunt.

“I just wanted to help. As usual, the response was amazing and all on trust,” said Mrs Hunt.

“£631 to-date has been sent directly to Richard’s account to help with his cash flow and over 325 boxes have been purchased by local residents.”

Mrs Hunt says the team is working around the clock to make as many visors as possible.

“I’m bowled over by what they have achieved, absolutely amazing,” she said.

“Whilst I was on their team facebook page the other night I couldn’t believe what was being discussed: materials needed; more printers; how they can get them done quicker; deliveries.  They were still discussing the next day’s events at 1am and then were back at it at 7am.

“They are heroes. I’m sure Bronllwyn will be clapping Richard as well as NHS staff this evening.”