A rising spate of arson attacks in Cardiff West has led to patrols being carried out by Police and Fire authorities.

A series of deliberate fires have been set in the Ely and Caerau areas of Cardiff in a problem growing since January this year, prompting authorities to perform evening patrols.

The South Wales Fire and Rescue Service have now begun a joint campaign South Wales Police aimed at quelling the spate of fire incidents. The alarming rise in the number of reported attacks has meant the specialist Fire Crimes Unit are tasked with dealing with the matter.

Mr Jenkins also added that arsonists have been targeting collections of fly-tipped rubbish littered around the Ely and Caerau areas to set alight.

In what appears to be a worsening series of events, a further four deliberate fires were set inside wheelie-bins in Caerau, last week which were extinguished by crews from Ely Fire Station.

On Sunday, crews were called out to deal with a deliberate grass fire in Caerau Lane, Caerau.

The Fire Crimes Unit have been working closely with South Wales Police and local emergency services, around the area in the hope to deter any further incidents and reassure concerned residents.

A spokesperson for South Wales Police said: “Last week four wheelie-bins were set alight in the Caerau area. To prevent further offences, and to reassure the community, police community support officers are carrying out evening patrols with a fire officer from Ely Police Station.”

South Wales Police also advised residents of the area to be vigilant and ensure their wheelie-bins are not left on the street overnight or kept close to the house.

No arrests have been made so far as Police and the Fire Crime Unit conduct their ongoing investigations.

A police spokesperson gave advice to local residents: “Only put your wheelie bin out on collection day. Try and avoid leaving it outside your property overnight; If your back garden is not secure your wheelie bin should be secured to an immoveable object away from the house.”

arson, Caerau, crime, Ely, fire, police
You may also like 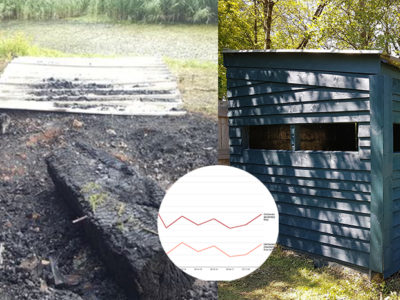