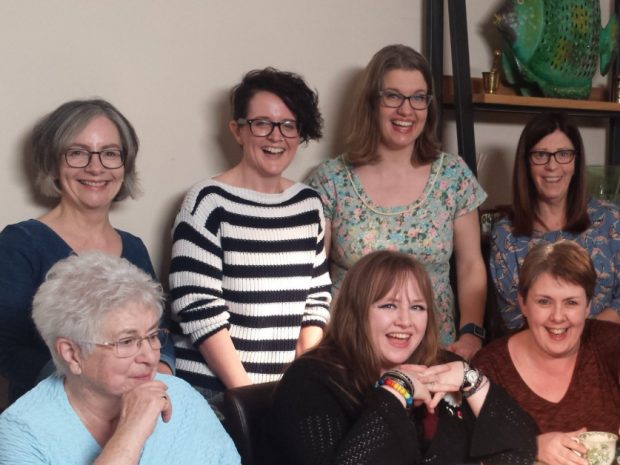 EXPERIENCES and misconceptions about Dementia was the topic of conversation at the latest meeting of Birchgrove Women’s Institute.

Although the organisation was formed during the First World War, the Birchgrove branch was established in 2012 to provide companionship, educational opportunities and to campaign on community issues. The agenda is full of pleasantries, a vote on what cultural issue the Women’s Institute will rally behind this year and a guest speaker.

“Everyone, this is Barbara.”

Barbara Wills, who works at Ty Enfys Care Home in Pentwyn, is a Dementia Friends champion. This means she can put on workshops to educate people about dementia, and encourage others to become Friends too.

Dementia Friends is an initiative by the Alzheimer’s Society, which hopes to educate people about dementia and how to support those living with the disease.

Putting introductions, and a large blue file, aside, the group play bingo. Instead of numbers, members circle words which match the sentences Ms Wills reads out.

“Dementia is not a natural part of ageing.

“Dementia is progressive… Oh, sorry. I gave you that one.” Everyone laughs. This special bingo is designed to debunk common misconceptions. The group establish dementia is not just because of age. If fact, there are cases of 20-year-olds suffering with the disease, though this is rare, Ms Wills explains.

Five volunteers are needed for the next task. Without hesitation, women rush to the front and proudly take their place.

In a line, backs against the wall, the women aged from 30-something to 50-onwards, smile and joke with one another while Ms Wills hands them cards.

Each volunteer is given a character and told to step forward if they are able to complete various tasks.

“Step forward if you can make cheese on toast,” Ms Wills began.

“If you can have relations with your partner,

“If you can have a part time job working on a checkout.”

10 questions, and 10 chances to step forward, pass by.

Others had only taken one, two, three and four steps.

Ms Wills urges the five to read their cards aloud so the whole group could see why they stepped when they did.

“You are 64 years old. You have had dementia for six years.”

“You are 64 years old. You have had dementia for six years.”

The others? Also 64 years old, and had suffered from dementia for six years.

Results are met with “ahh” and “oh”, as chatter fills the room.

The exercise demonstrates that perception is everything. Everyone has different experiences of dementia and this influences their ideas of what a sufferer is capable of.

“Imagine your brain is a collection of fairy lights: Dementia is like when some of lights begin to dim, or a bulb here and there stops working. For each person, these lights go off at different times,” Ms Wills continues.

Do with, not for: a phrase that repeats itself several times through the night.

The evening focuses around the importance of providing tools and support for dementia sufferers, so they can still be independent. They often become deskilled as friends and family overcompensate.

As Ms Wills finishes the session, she offers an anecdote. “At a care home in England, a dementia sufferer was frustrating staff and residents by constantly tapping. Nurses felt bad about not being able to help her, as the woman’s verbal skills has deteriorated, and other residents found it annoying.

“This kept happening and no one understood why, until her granddaughter returned from Australia, where she had been living. When nurses asked what the tapping was about, the granddaughter laughed and explained that during the war, her grandmother worked on the enigma… She had just gone back to her twenties and was at work.”

The event touched many. After the talk, members share tea, cake and their personal experiences with dementia.

I thought of my nana in her later years: her confusion when my newborn brother cried, thinking it was her son. Find out more about the Birchgrove Women’s Institute