Home > News > Boy, 9, sends his cello for children in Patagonia to enjoy

Boy, 9, sends his cello for children in Patagonia to enjoy 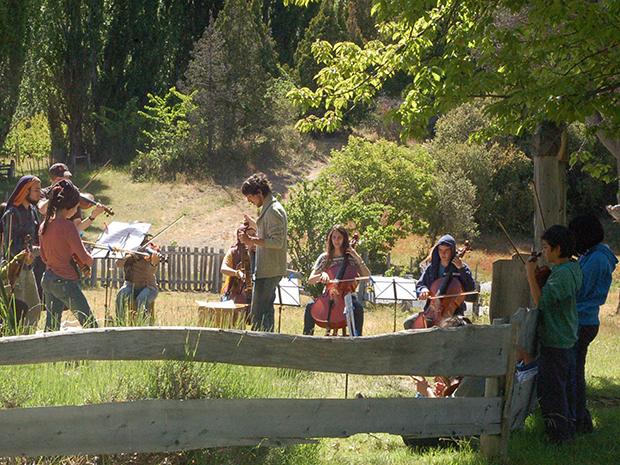 A NINE-YEAR-OLD musician has donated his cello to charity so that children in Patagonia have a chance to play music at their school.

Owen Hurrell, from Penylan, gave his quarter-sized cello to the Patagonia Instrument Project.

“I enjoy playing the cello because it not only makes me happy but other people happy too,” said Owen.

“I wanted to send my cello to another country because, I guess, it would help other children who have the same joy that I have playing instruments, in a society that perhaps isn’t as wealthy as us.

“I love music, I do lots of singing and I play the piano, I enjoy all of it.”

Owen began playing the cello when he was five and recently passed his grade three with distinction. A group of musicians playing outdoors in Trevelin, Patagonia The contents of a case full of percussion instruments Patagonia instrument Project chairman, Chris Stock standing my the trunks full of instruments that are about to be sent to Patagonia

The project was founded in 2016 after a BBC National Orchestra of Wales’ tour of the Chubut region of Patagonia.

Since then the charity has been raising funds, collecting instruments and talking to embassy staff in London and Argentina to get permission to send the shipment.

Charity trustee Rob Samuel, a BBC NOW trumpeter, said: “It has been a complicated process, fulfilling all the government requirements, partly because this is not something that anybody has experience of doing on either side of the Atlantic.

“We have all had to learn, and legislature has had to be put in place it would appear, to make it a success. Despite the problems though, we were never discouraged.”

The shipment including 57 violins, a folk harp and a trombone, is expected to arrive in April, after traveling 7,500 miles.

The instruments will be distributed by the education ministry and Welsh Association to schools throughout Patagonia.

Rachel Ford, Cellist at BBC NOW said: ”There has been a huge will from all bodies we have contacted to make a success of this project, for the good of the children.

“We have had support and guidance from the Argentine Embassy in London, the British Embassy in Buenos Aires, British Council Wales, the Chubut legislature, as well as our many retail supporters in Wales who have offered us preferential rates.”

Argentina, cello, charity, instruments, Patagonia, violin
You may also like