Home > Where You Live > City > Tap, tap, give: make a contactless donation for the homeless

Tap, tap, give: make a contactless donation for the homeless 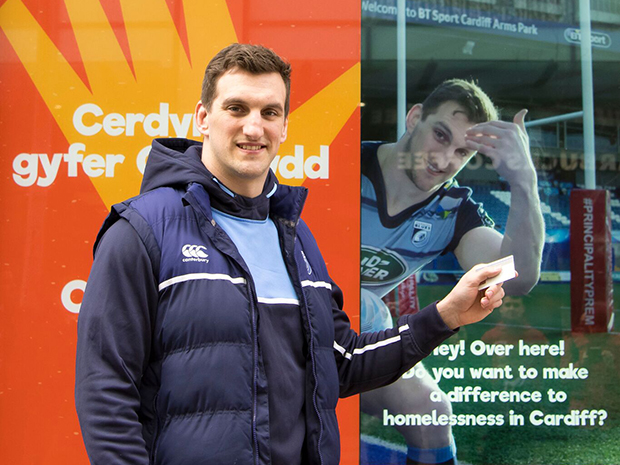 Donate £2 with the tap of a card to help reduce homelessness in Cardiff (cr. Give DIFFerently)

HAVE you ever seen a donation bucket for charity and wanted to give but had no change on you?

Well, thanks to an innovative new scheme called Give DIFFerently, people in Cardiff can now use their contactless debit or credit cards to donate to charity.

An interactive screen featuring Cardiff-born rugby star Sam Warburton has been installed on the Hayes. Sam Warburton has been involved in the campaign (cr. Give DIFFerently)

This screen lets members of the public to ‘Card it for Cardiff’ by tapping their card on the window at any time of the day or night.

For every tap, a fixed fee of £2 will be put towards Cardiff-based charities who are currently working with those who are homeless or at risk of homelessness.

Warburton, who plays for Cardiff Blues, said: “Having grown up in Cardiff, I have noticed the increase in people rough sleeping, especially more recently, so I was keen to support this collaborative approach and help raise awareness.”

While this particular scheme will only last for two weeks, a spokesperson for Give DIFFerently told us about future plans to expand the project after this trial period.

“If it goes well we hope to set up contactless pay stations at counters in shops, something more subtle that we can implement on a wider scale so there would be 20 or 30 of these contactless donation points in shops across the city.”

Give DIFFerently is a partnership between Cardiff businesses, South Wales Police, Public Health Wales, Cardiff Council, Community Foundation in Wales and the charities Huggard, the Salvation Army, The Big Issue Cymru and The Wallich who will receive money from the scheme.

Adrian Field, Executive Director of FOR Cardiff, the business improvement district for the city, said: “Feedback from businesses is that cash payments are in decline and according to recent articles it is expected in the next eight to ten years it will only account for 21% of purchases.

“This is why we have been working with the frontline services tackling street homelessness across the city to think about how we move with the trend and make sure the generous people of Cardiff can give to the people they see on the streets, even if they’re not carrying cash.”

This sentiment has been echoed by members of the public on Twitter such as Alexander Love, who said: “Brilliant idea, often don’t carry cash but always armed with my card. Fingers crossed it’ll be a huge success.”

Beth Thomas, regional manager at The Big Issue Cymru, added: “We have seen the success from other homelessness alliances of contactless technology as an alternative way to give and wanted to bring that to Cardiff.”

As the focus of this campaign is prevention, 10 per cent of the fund will be set aside for organisations working with those “at risk of adverse childhood experiences” to prevent the next generation from becoming homeless.

In addition to this scheme, every £2 donated by contactless payment will be matched by the Four Acre Trust, doubling the total amount raised.

You can donate via the contactless technology in The Hayes until Sunday 25th March or at any time by texting DIFF20 followed by the amount you want to donate to 70070.