Residents call for council clampers to focus on roads instead 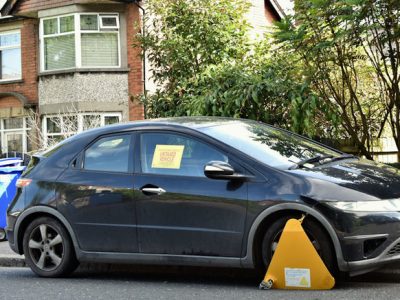 Since January Cardiff Council have clamped or removed 41 untaxed vehicles since powers have been passed by DVLA.

CARDIFF COUNCIL has been criticised by residents over its car clampdown on untaxed cars.

The council has clamped or removed 41 untaxed vehicles since January, when it began using powers given to it by the DVLA.

The council has always had the powers to clamp and remove illegally parked vehicles, but chose not to do so.

However, a change in council policy means they will now clamp untaxed vehicles too.

Untaxed cars are a sizeable problem in the city.

In a one-day street audit of the city last November more than 8,500 untaxed vehicles were found, according to the environmental scrutiny committee. A separate report also revealed that of the 1,000 abandoned cars recorded in 2017, only 28 were removed.

“This new policy is about clearing our streets of dangerous vehicles and clamping down on people who persistently give little regard for the rules,” said Cabinet Member for Strategic Planning & Transport, Caro Wild in November, when the council revealed the change in policy.

“We also know that there is a strong correlation between unregistered vehicles and crime, so we are pleased we now have the powers to act.”

However, some residents do not want extra money spent on towing the cars away when it could be better spent on improving roads and pavements.

Taking homes AND cars from the fine citizens of Cardiff. Its only you guys who complain when the homeless numbers rise and the streets you can't be bothered to clean become slightly more messy. #screwpoorpeople

Alwyn Evans, of Heath said: “Perhaps they can start by mending our broken roads and not spend on drop kerbs at £1,700 that fill with water each time it rains.”

Jason Harper, 47, does believe that taking untaxed cars off the roads is a good thing, but echoes Mr Evans’ views.

The Heath resident told The Cardiffian: “I do believe it’s a good thing taking untaxed cars off the road but more of a problem is the state of the roads us tax paying people drive on, they are a shambles!

“I can’t actually drive in a straight line anymore on many if not all roads in Cardiff as I spend most of the time adjusting my steering to avoid [the cracks].”

Chrissie Morris, of Pontcanna, has called for higher fines from the council to better fund the support they offer to the DVLA.

She said: “I would rather the fine be higher and actually go towards something useful than the expense of having the vehicle towed.

“It just seems a bit pointless to tow if it’s been clamped already.”

Vehicles cannot be clamped for regular parking offences, unless they are dangerously parked on a highway.

A vehicle by law must be taxed if it is to be used or kept on the highway under the Vehicle Excise Duty Regulations 1997.