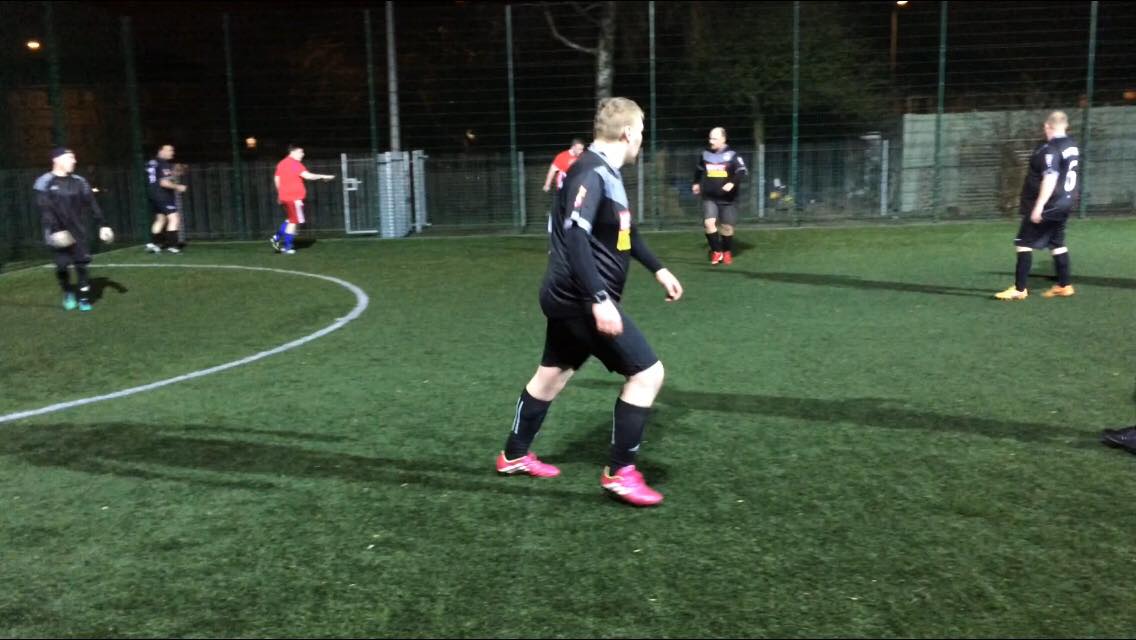 Members play a five-a-side game after their individual weigh-ins.

ONE in four adults in Wales is either obese or overweight, the latest NHS figures shows.

Chris Norman was due for a gastric sleeve procedure at the end of last year to help lose weight.

After the operation was pushed back, he decided to join Man v Fat – a weight-loss programme that combines five-a-side football – and he hasn’t looked back since.

“With the gastric scheme operation it would have come off so quickly that I would have had to seriously consider having plastic surgery; tummy tucks and skin taken off because of the overhang.

“But with Man v Fat, it’s a natural progression. You can do as much as you want on the pitch and it just falls off nicely. You start to tone, you can feel your body getting tighter.”

He says he has enjoyed losing weight this way due to the people around him: “If you lose on the pitch, it doesn’t matter; if your whole team has lost on the scales, that’s more important.”

Man v Fat is exclusively for men and provides support and dietary advice while they lose weight.

A range of ages, weights and ability take part in the league – and many players are not even football fans.

Nas Suleman, the Cardiff league’s coach and nutritionist, has seen many success stories and credits the “club feel” of the group.

“We’ve transformed it from a league with separate teams to a club. Where everyone knows each other, everyone comes in and talks together,” he said.

“Every time we do a weigh-in and somebody hits a benchmark, everyone is clapping and cheering for each other. There are leagues all over the UK, but Wales currently has only one taking place every Thursday at Channel View Centre, Grangetown. It’s into its second season, and members have nearly doubled from 40 to 72 – the club’s capacity is 80.

Mr Suleman hopes they will have the demand to create more leagues in Cardiff in the future.

Mathew Maksimovic, 35, has lost 3.5 stone over the last year through Man v Fat and wants to help others achieve their goals.

“Our ultimate goal is to support and help each other. I recently joined a new team in Man v Fat so I could pass on what I’ve learned and what I’ve achieved to the new guys,” he said. Matthew Maksimovic chats to The Cardiffian after playing his match.

“One of the guys has hit 5% weight loss already. That’s what I’m getting out of it, I’m now giving that back to them. I just want to help everyone else because Man v Fat has been amazing for me.”

Ben Gleeson, who recently joined the league, says the club atmosphere motivates him to lose weight.

“You have that team spirit, not wanting to let the team down. I think people need that sometimes,” he said.

How does Man v Fat work?

Teams compete against each other – points are given for goals scored and weight lost.

An extra goal is given to a team when two players weigh less than the previous week.

If a player loses weight three weeks in a row, they score a hat-trick for their side.

Own-goals can also be given if a player weighs more than their registration weight.

Each season lasts 14 weeks and the group holds an award ceremony where the winners are those who lose.

Man v Fat takes place every Thursday between 7pm and 9pm, at Channel View Centre, Jim Driscoll Way, Grangetown. If you, or someone you know, is interested in joining you can find out more here.