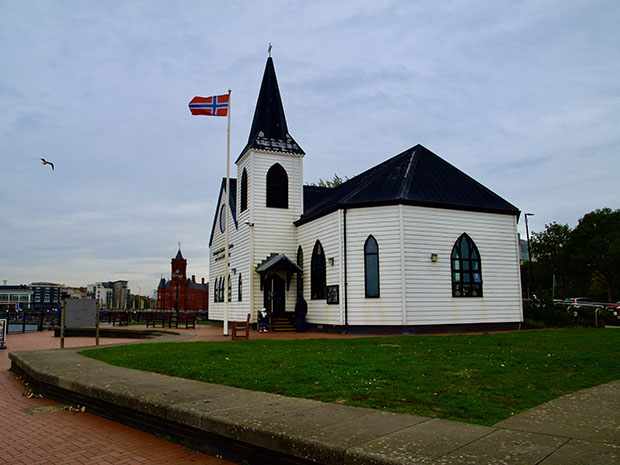 Council remains vague on the future of Cardiff Bay landmark

MORE than 4,000 people have signed a petition launched by the Welsh Norwegian Society to prevent Cardiff Council from leasing the Norwegian Church to a private tenant.

Despite the council’s promise not to sell the church, members of the WNS fear the building’s community value will be ignored for commercial gain.

In March 2019, Cardiff Council announced that it would be advertising the building as part of its plan to bridge a £25 million budget gap next year.

Pauline Lomax, of Llandaff, is a member of the WNS and sells her crafts in the church’s Gallery Gift Shop.

She said: “This plan would conflict with the original objectives of the charity… It’s important the church is maintained for the people of Cardiff and visitors to the city. For me, it’s not political – it’s personal.”

Tony Caley-Burnell, 54, of Dinas Powys has been the Norwegian Church officer since 2008.

“The town grew into a city because of the docks, and this building … has been a part of that, throughout the whole story of Cardiff. So, it’s important that we keep the heritage side of things. It was built for the community to enjoy for music and arts,” he said.

However, due to cuts totalling £218 million over the last decade, the council must save money.

A council spokesperson said: “What we are doing is looking to secure an operator to run the building on a lease basis so that the building can maximise its commercial potential, we can secure investment, whilst ensuring that the building remains in public ownership.”

“As the sole trustee, the Council will ensure that any future plans will preserve the integrity of the church, ensuring the building retains its iconic status in the Bay.”

“No decision has yet been taken on the proposed future use of the building and further information will be released when it is available.”

Benjamin Drury, 36, from Blackwood, runs the church’s Gallery Gift Shop. He doubts any new tenant will keep things as they are.

“They couldn’t make it commercially viable,” he said.

Up to 70 small crafters rely on monthly craft fairs at the church. The space is also used by community groups like Solace – a carers support service – and touring musicians.

Ms Lomax said: “I personally am not reassured by the council’s statement… there is an evident conflict of interest between the council and the Trust of which the council are meant to be the guardian.”

In March 2019, the WNS sent a Statement of Concern to the Charities Commission which – among other things – noted the late submission of Trust accounts for three of the last five years.

In response, a council spokesperson said: “On one of the years there was an ongoing audit at the time that accounts should have been filed, which caused a delay and on the other two occasions, it was a case of human error. The person who did file the accounts left the authority and it was missed. This work has been reallocated to ensure it doesn’t happen again.”

Ms Lomax suggested the council should be more open to assistance from WNS: “Part of the agreement was that there should be an advisor from Norway, and from the Welsh Norwegian Society. Welsh Norwegians from different parts of Wales support the church and it’s denying them a voice to express ideas.”

Mr Caley-Burnell said the church was a unique resource for tourists: “A few years back the visitor centre was closed down. Visitors to the capital city of Wales are coming down to Cardiff Bay and we’re actually becoming the main visitor centre for them,” he said.

On December 1, the church will celebrate its 150th anniversary with the Festival of Light and Friendship – to which Norway is donating a live Christmas tree.