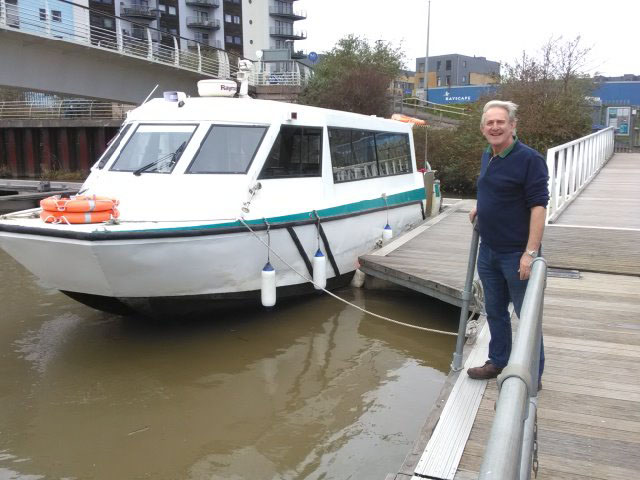 BUSINESSES on the River Taff have taken a financial hit following the floods caused by Storm Dennis.

All the pontoons between Cardiff Bay and the castle were badly damaged by the storm on February 15 and 16.

The Harbour Master has said that boat companies cannot operate on the Taff until the pontoons are repaired, but it is not known when these will happen.

“On the surface, the pontoons look fine, but a lot of bolts have stretched due to the high water level and several bolts have been sheared off,” said Danny Rees, 63, owner of the water-taxi service Cardiff Boat.

Mr Rees said it would be weeks before the pontoons can be fixed.

“They’ll need to wait for the wind to drop, or the engineers will lose their fingers.”

Steve Woodward, owner of the Aquabus boat company, said he is set to lose £3,000 for every week the pontoons are closed.

Mr Woodward has also not been able to use one of his boats for over a year, due to rocky material settling on the riverbed. He said it has cost him around £25,000 in profits.

“The River Taff is getting shallower and shallower every year, and I can’t get my hospitality boat up it anymore,” Mr Woodward said.

“I can’t pick up wedding parties or chartered groups at the castle anymore because the berth there is too shallow.”

Boat owners can email the Harbour Master to request that material is cleared from the riverbed.

Aquabus and Cardiff Boat work with Pettigrew Tearooms, in the Bute Park gatehouse, to direct customers to and from boat services on the Taff.

The tearooms have seen a fall in the number of customers, following the closure of river services and flooding in Bute Park.

The south of the park remains underwater, the gates are closed and it cannot be accessed by the public.

“We get a lot of our customers from the park and the boat services,” said Naomi Whitcombe, 25, assistant manager.

“At the weekend, a lot of people had to cancel bookings with us because their areas were so badly flooded.

“Four bookings were cancelled on the day on the day of the storm, and another few on the Monday.

“It’s been very tough, but we are really lucky that we have been able to stay open.”

The tearooms are currently accessible through the Castle Street entrance.

A council spokesperson said: “The record river flows on the River Taff during Storm Dennis damaged all of the water bus stop pontoons along the river, and into Cardiff Bay, apart from the Barrage South stop.

“Our Parks and Harbour Authority teams are hard at work trying to get Cardiff Bay, Bute Park, and all the city’s other affected green spaces, back to normal as quickly as possible.”

“Regular surveys are carried out to monitor the depth of the river, but as the increase in the level of the riverbed since 2017 is negligible, we cannot justify the cost of dredging the river again at the moment.”